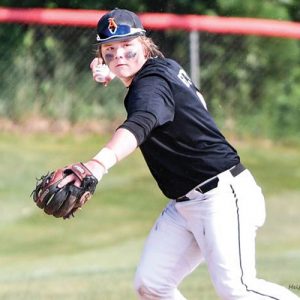 ALMONT — The Almont baseball team fell one run short when the final scores were added up, dropping a 3-2 verdict to Notre Dame Prep in a Division 2 regional opening round battle last Wednesday afternoon.

With the outcome, Almont watches an outstanding 21-8 season reach an endpoint.

In Wednesday’s battle, contested with temperatures close to 90 degrees, Almont and Notre Dame Prep were both held scoreless during inning number one.

The next inning would see Notre Dame Prep collect two runs, while holding Almont to none.

Almont then countered with a 1-0 third inning edge, closing the gap to 2-1.

That was followed by a scoreless fourth inning.

Inning five would see Almont produce one run and Notre Dame Prep none, squaring the score at two runs apiece.

That was followed by a scoreless sixth inning of play.

Notre Dame then pushed across a run during the bottom half of the seventh inning, pulling out a 3-2 victory.

Blake Cody paced Almont’s offensive attack. He finished with a pair of singles. The Raiders also received one single from Charlie Koenig.Brandon

Hunsaker took the loss for Almont that day despite pitching a good game. He allowed just two hits over 6 1/3 innings of work, struck out four and walked two.