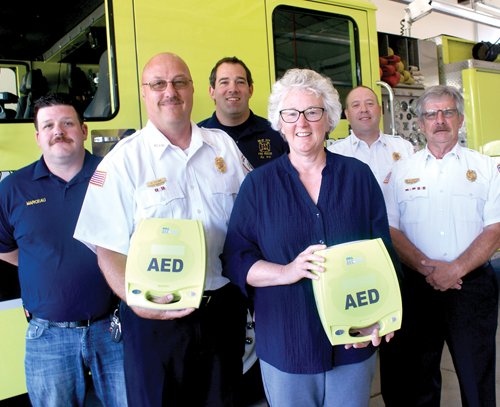 IMLAY CITY — The Imlay City Fire Dept. is the beneficiary of a pair of new AEDs (automated external defibrillators), which were granted to the department by the Four County Community Foundation.

Stone wrote the grant application several months ago and was recently informed that the request had been approved by Four County’s Board of Directors.

The new AEDs are valued at about $1,700 apiece ($3,400 total) and will replace a single unit that is about 15 years old and considered obsolete.

“We very much appreciate the generosity and support of the Four County Foundation,” Stone said. “This grant award gives us and community members access to equipment that can save people’s lives when needed.”

Horton said one of the new AEDs will be carried in one of the fire department’s primary pumper trucks; while the other will be placed in the rescue vehicle, along with the Jaws of Life.

Dickens said the grant award helps fill an obvious need of the fire department, while providing for the welfare of local residents.

“This was an easy decision to make for us,” she said, “because this is equipment that can save a life.”

Stone said he prefers never having to use the equipment, but is thankful it will be readily available in the event of a life-threatening emergency.

“The good thing is that we will now have easy access to this equipment, so we will be prepared for such a situation,” he said.

An AED is a portable, easy-to-use unit that can deliver a shock to help the heart re-establish its normal rhythm in event of cardiac arrest.