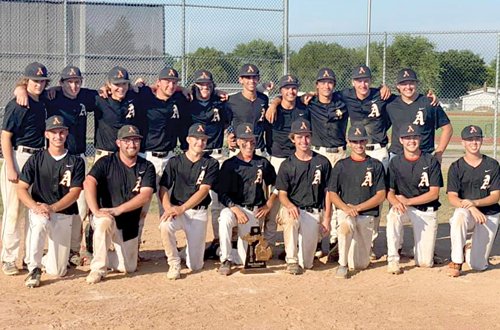 The Almont baseball team poses for a photo after winning their Div. 2 district last Saturday in Yale.

With the outcome, Almont (21-7) advances to Wednesday’s regional semifinal at Linden There Almont will go up against Notre Dame Prep in a contest scheduled for 5 p.m.

Donovan Galovich (three singles) led Almont’s offensive attack. He was given assistance in the hitting department by Landon Kruse (a single and a double), Blake Cody (a pair of singles), Brenden Haldeman, Reis Stine, Brandon Hunsaker and Kyler Fisher (a single each).

Hunsaker was the starting Almont pitcher. He allowed four hits over five innings, struck out six and walked five.

Stine worked the final three innings. He gave up three hits, retired one on strikes and walked none.

Almont reached the title game with a 15-0 win against Imlay City.

Nolan Idyle and Haldeman paced Almont with a triple each. Dawson Maxlow Cody Koval, Galovich and Fisher (a single each) also reached the hitting column.

Galovich was Almont’s pitcher of record. He allowed three hits over four innings, retired two on strikes and walked none.