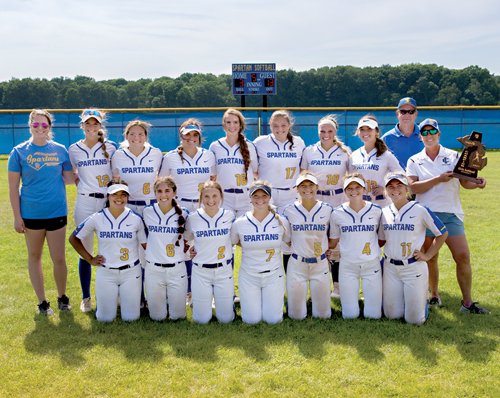 The Imlay City softball team takes time out for a photo after earning a top Division 2 district finish last Saturday.

With the decision, Imlay City (27-13) moves on to this Saturday’s regional at Clio. There they will meet Linden in a semifinal contest which is slated to get underway at noon.

Abigail Thibodeau (two singles and a double) and Natalie Stone (a single and a triple) put up Imlay City’s best offensive numbers. The Spartans also had Emma Sellers (a double) plus Jaya Forti, Skylar Stone, Yesenia Rojas, Natalie Douglas and Lexa Forti (a single each) reach the hitting column.

Makenzie Hayward was the winning Imlay City pitcher. She allowed five hits over five innings, struck out two and walked one.

Imlay City advanced to the district title encounter with a 7-2 victory over Almont.

Lexa Forti (a triple) and Natalie Stone (a double) notched Imlay City’s top plate credentials. They were given assistance in the hitting department by Jaya Forti, Sellers and Thibodeau (a single apiece).

Grace Schriber was Imlay City’s pitcher of record. She gave up nine hits over seven innings, retired seven on strikes and walked none.

Isabella Theisen, Devin Johnston and Grace Koenig paced Almont, which finishes at 18-12, with a pair of singles each. Sarah Hall, Grace Johnson and Samantha Leid added one single apiece to the Raiders’ cause.