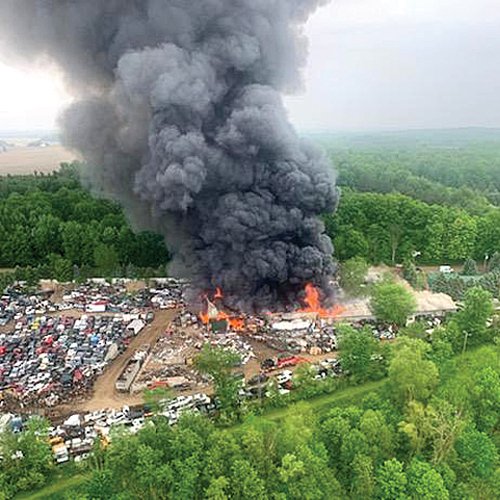 A large plume of black smokes rises from the scene of an intense fire at Jim’s Recyling on Youngs Road in Arcadia Township. No one was hurt in the incident.

ARCADIA TWP. — Dozens of firefighters from multiple local fire departments and jurisdictions responded just before 3 p.m. Monday, May 24, to a massive structure fire at Jim’s Recycling at 1397 N. Youngs Rd.

By the time they arrived at the scene, firefighters and emergency personnel encountered flames and thick dark smoke emanating from the business’s shop area.

Neighbors said they could hear intermittent explosions and popping noises coming from the area of the fire, which they believed to be the sound of exploding propane canisters.

Lapeer County Sheriff’s deputies at the scene reported that no one was injured in the fire.

The affected structure and its contents, including equipment, tires, vehicle parts and other materials was destroyed in the blaze.

Due to the size and nature of the fire, firefighters had to access and transport water to the scene from various sources.

At around 4:15 p.m., emergency personnel at the scene estimated it could take hours to fully contain the fire.

Meanwhile, the section of Youngs Road north of Ostrom Rd was closed for some time.

Information regarding specific details related to the fire, including its believed cause, was unavailable at press time.

A total of 18 fire departments responded to the fire.