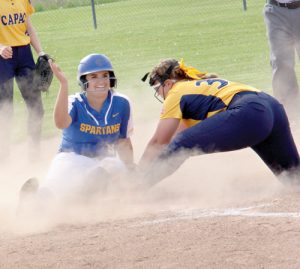 In the opener, Imlay City posted a 13-1 win against Capac.

Hayward was Imlay City’s pitcher of record. She gave up two hits over six innings, struck out eight and walked three.

In the second game, Imlay City picked up a 15-2 victory over Capac.

Thibodeau (three singles), Seanna Caudillo (a single and a home run), Skylar Stone (a single and a double) along with Grace Schriber, Jaya Forti and Sellers (a pair of singles apiece) put up Imlay City’s top plate credentials. Olivia Livingston, Hayward, Rossen and Douglas added a single each for the Spartans.

Schriber was the winning Imlay City pitcher. She allowed two hits over five innings, retired 10 on strikes and walked none.

Julia Schaefer and Madalyn Roberson (a single apiece) were the Capac players who reached the hitting column.