However, the city’s new splash pad may not be available for use before June 1.

The brief delay would reflect the governor’s plan to lift the current ban on outdoor water park features on June 1. 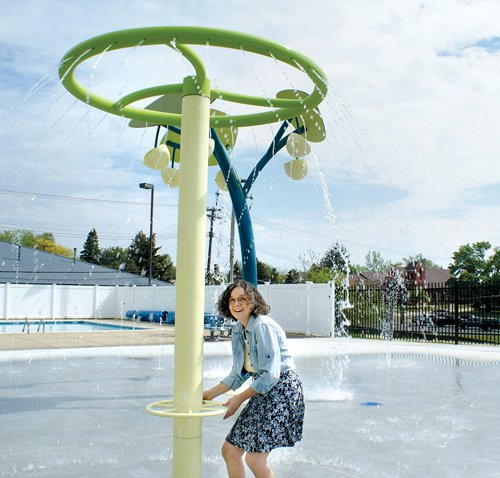 Imlay City Pool Manager Jeanette Farley dodges spray while testing out some of the features at the city’s new splash pad. It is expected the splash pad will be ready to go by the pool opening.

Pool Manager Jeanette Farley said the Lapeer County Health Department was scheduled to conduct an inspection of both the pool and splash pad on Tuesday, May 25.

“Even if we cannot operate our splash pad feature by Memorial Day weekend,” said Farley, “we should be fully operational by the following weekend.”

Farley, who has managed the Imlay City pool since 2013, said she has assembled a trained staff of 12 lifeguards to ensure the safety of residents and visitors using the facilities.

She credited Imlay City’s DPW staff for their assistance in monitoring and maintaining pool operations.

“This is a collaborative effort that requires the cooperation our lifeguards and DPW personnel,” she said. “If something breaks or there is a problem, I make a call and they’ll be here to troubleshoot the problem.”

Farley said the new splash pad, which is situated within the same space, has already been tested and is operating properly.

She pointed out that that younger children using the splash pad must be accompanied by an adult.

“We think this new feature offers something special for the kids,” Farley said. “We want to thank the Imlay City Commission and (former city manager) Tom Youatt, whose idea it was to apply for the grant funding. It’s been a long process to complete the project, but we’re excited about it.”

The swimming pool will be open seven days a week from June 12 through September 6.

Special rates are available for individuals, younger children, senior citizens and veterans; along with seasonal passes for individuals and families.

Imlay City commissioners awarded a bid for construction of the $353,000 splash pad to Penchura/Aquatix of Brighton on Sept. 1, 2020.

A large portion of the splash pad’s cost was funded by a $150,000 grant from the Michigan Dept. of Natural Resource’s Recreational Passport program; with the balance coming from the Parks and Recreation Board fund.

At the time, the state’s portion of the cost was the highest allowable per the terms of the city’s grant request to the Michigan Dept. of Natural Resources.

Ground was broken for the project last November, with the construction bid going to JDL Excavating.