Hearing attendees not in favor of rezoning request or proposed business

BERLIN TWP. — More than 50 attended a public hearing on Thursday, May 20, to voice their opposition to a rezoning request from a developer hoping to build a Dollar General store in Allenton.

Members of the planning commission heard from dozens of residents and business owners who say they’re not in favor of the retail store being built on the east side of Capac Road, just south of Almont Road.

Nearly all cited traffic concerns as it relates to traffic volumes and speeding on Capac Road, believing that such a business would only magnify the problem. Many others also said they didn’t believe it was a good location for the store in what is a mostly residential setting.

Rebecca Spalding said she felt allowing the chain store to set up shop would “devalue Berlin.”

“I feel sorry for the people who would have to look at the glowing signs of Dollar General every night,” she said. 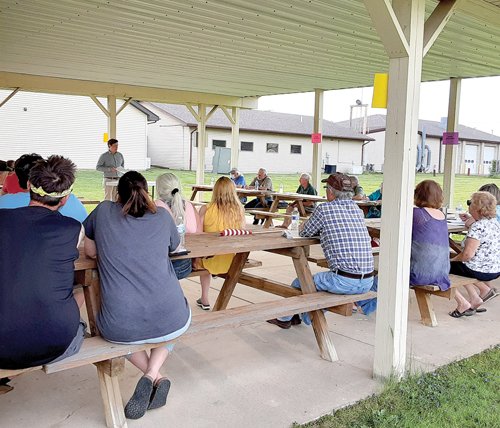 Thursday’s public hearing was held in the pavilion behind the Berlin Township hall. Residents and planning commission members listen as Mark Zawadski of Zaremba Group addresses the rezoning application.

Lucille Scheer, a Capac Road resident, recounted the numerous times friends and family have been involved in traffic accidents as they attempt to enter her driveway. She said she would also worry about the dollar store enticing people to walk down the side of Capac Road to access it.

Others who spoke said they moved to Berlin Township to get away from stores and questioned the need for building the store when Dollar Generals are already in existence in Capac and Almont.

Zaremba Group, the project developer, has applied to have the property’s zoning changed from ‘Multiple Family Residential’ to ‘Local Business.’ Zaremba’s Mark Zawadski and attorney Mark Clark spoke on behalf of the project.

Zawadski said the rezoning would allow for small scale development that would have a limited impact on the area. He said the store would be a low traffic generator, create new jobs and bring in more tax revenues.

Clark noted that many of the issues raised by residents, like access points and screening, could be addressed as part of a future site plan process.

Marvin Yatooma who owns the gas station at the corner of Almont and Capac roads said he believed the new store would negatively impact his business. He believes other types of enterprises within the Allenton area would be more welcome.

“A laundromat or restaurant is what this community needs. That’s why so many of these people are against it,” Yatooma said.

Planning commission members did not vote on the request on Thursday but indicated they would likely make a decision when they meet again on June 7 at 7:30 p.m. at the Berlin Township hall. The recommendation will then be passed along to the Berlin Township board for a final decision.