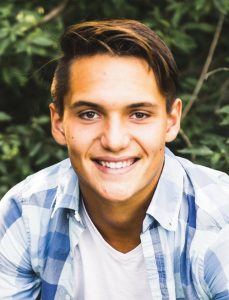 Austin “Robbie” Rob Battani, age 19, passed away following a traffic accident on May 22, 2021. He was born August 22, 2001 in Troy, the son of Richard Michael Jr. and Rene Angeline (Finn) Battani. He graduated from Almont High School in 2019 and attended Grand Valley State University. Robbie had a passion for physical fitness and also endeavored to read the “top 100” classic books, recently finishing reading War and Peace by Tolstoy. Robbie worked very hard to achieve regional champion and state qualifier status in Almont wrestling, and regional champion and state qualifier in Almont track and field as a pole vaulter. He was also named Almont’s 2018 Homecoming King, was involved in church altar serving, and heavily engaged with his church youth group. Robbie was a gentle soul that focused his energy on getting smiles out of those around him with his “goofy” demeanor and wit.

Robbie was preceded in death by his younger brother Evan Matthew Battani in 2018, as well as a number of beloved cousins and grandparents.

A Funeral Mass will be said on May 27, 2021 at 11 a.m. at Immaculate Conception Catholic Church in Lapeer. Memorial Masses may be made in Robbie’s honor.