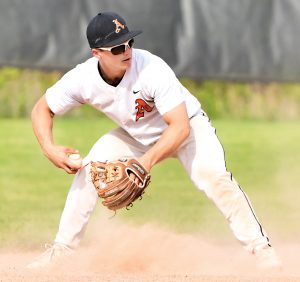 Almont’s Nolan Idyle looks to throw out a runner in a BWAC clash with Yale last week.

ALMONT — The Almont baseball team won a pair of games against Yale in Blue Water Area Conference action this past week.

Almont began the two-game stretch with a 10-5 victory over host Yale on Monday, May 17.

Hunsaker and Cody Koval shared the pitching responsibilities for Almont. They allowed seven total hits, struck out 12 and walked six.

Galovich paced Almont with a double. Nolan Idyle, Fisher, Cody and Koenig added a single each to Almont’s cause.

Stine was the winning Almont pitcher. He gave up two hits over seven innings, struck out four and walked none.