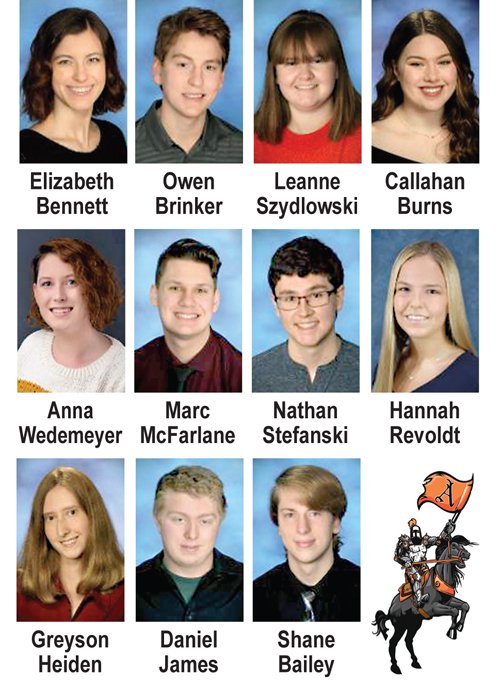 Almont seniors will gather one last time to celebrate their achievements and receive their high school diplomas on Sunday, June 6, in a 5 p.m. ceremony on the school’s football field.

Almont’s Top Ten students for the Class of 2021 are as follows:

Elizabeth Bennett is the daughter of Brian and Kristin Bennett of Almont. Throughout her four years in high school, Elizabeth has strived to not only participate, but to lead. With a final GPA of 4.3335, she has emerged as Valedictorian of the Class of 2021, an honor which has been achieved through momentous hard work, dedication, and some degree of sacrifice. Elizabeth was a member of the varsity cross country team for three years. She also participated in Student Council for all four years of high school, Mathletes for one year, was a National Honor Society member for two years, and a three-year member of the Rachel’s Challenge where she served on the leadership team for two years in the offices of secretary and president. For her academic success, Elizabeth was named as Almont’s “Brightest and Best” by WXYZ Channel 7 News.

She will be attending Saginaw Valley State University in the fall. Elizabeth was granted direct admission to the SVSU nursing program and was awarded the President’s Scholarship which will provide full tuition for the four-year Bachelor’s degree program.

Almont High School Salutatorian, Owen Brinker, is the son of Douglas and Roni Brinker of Allenton. Owen plans to attend Central Michigan University after graduation to pursue a degree in the business field.

Through his years at Almont High School, Owen has attained a 4.1925 GPA, earned 32 college credits during high school, and was selected for the WNEM TV-5 “Mid-Michigan’s Best & Brightest” award. Owen has taken several of the Advanced Placement courses offered at Almont High School and earned the highest score possible on the AP Exam for both American History and World History, while also scoring high on the AP American Government and Politics Exam. He has been an active member of Almont’s National Honor Society for two years and is also a member of the National Society of High School Scholars. In the NHS he was a member of the Almont High School Recycling Committee, tutored middle school students, and assisted with the setup of the middle school book fair. Owen also participated in JV football for two years and JV basketball for one year.

Leanne Szydlowski is the daughter of Glen and Sonya Szydlowski of Almont. Ranking third in the Class of 2021, Leanne finished high school with a GPA of 4.167 and was selected for the WNEM TV-5 “Mid-Michigan’s Best & Brightest” award. She was a dedicated member of the Almont Robotics Team for four years. Leanne drove the robot in many competitions during her four years on the team, and served as team captain her senior year. Leanne was also a member of the Almont Marching and Concert Bands for four years, where she played clarinet and bassoon and was clarinet section leader as a senior.

After high school, Leanne plans to attend Northern Michigan University to pursue a degree in biology with a zoology concentration.

Callahan Burns is the daughter of Sean Burns and Shawna Cuda and resides in Almont. She has participated in the Almont Theater Department for three years in shows such as Cinderella and High School Musical. As a member of the National Honor Society, Callahan has been volunteering at the Stone Soup Kitchen in Lapeer for two years. In addition to her dual enrollment classes at Macomb Community College, Callahan also took University of Michigan-Flint dual enrollment courses in the Medical Careers Acceleration Program (MCAP) offered through the Lapeer County Education & Technology Center and she has attained a final cumulative high school GPA of 4.1203.

Callahan will be attending Eastern Michigan University on the Presidential full-ride scholarship this fall and plans to major in public health.

Anna Wedemeyer is the daughter of Pete and Dawn Wedemeyer of Almont. Anna will graduate fifth in her class with a 4.1088 GPA. She participated on both the JV and varsity golf teams and varsity bowling for four years. Anna is a member of the Lapeer County Community Foundation Youth Advisory Committee of which she is currently the vice-chair. In this group, she has participated in several service projects to better the local communities, such as donating backpacks to schools in the county, making and donating blankets to cancer treatment centers, and providing grant funding to schools. In her senior year, she was also dual enrolled in the Medical Careers Accelerated Program (MCAP) through the University of Michigan-Flint. Anna will be attending Michigan State University in the fall and plans to major in biochemistry.

Marc McFarlane is the son of George and Nina McFarlane of Almont Township. Marc is graduating with a cumulative Almont High School GPA of 4.1003, ranking him 6th in the Class of 2021. In high school Marc took several AP classes along with dual enrollment classes at Macomb Community College. During his senior year, Marc was dual enrolled in the University of Michigan-Flint Medical Careers Acceleration Program (MCAP). He was a part of the Almont’s National Honor Society for two years and during his junior year, he served on a committee that volunteered at the Stone Soup Food Pantry in Lapeer. During his senior year, Marc served as the NHS president. Marc was also a part of the Yearbook staff during the 2020-21 school year, where he served as editor.

Marc plans to attend Wayne State University in the fall to pursue a degree in public health.

Nathan Stefanski is the son of John and Paula Stefanski of Almont. Nathan has attained a GPA of 4.0753. He has been a member of the Almont Varsity Singers Choir all four years of high school, was on the Mathletes Team, and was on the JV bowling team for one season.

Looking towards the future, he plans to go to Macomb Community College next fall and will then transfer to a larger university for the remainder of his studies. Nathan is undecided on his major, but he thinks it will fall into the mathematics field. Nathan has always enjoyed math all of his life, and he believes studies in the field of mathematics will lead to an enjoyable and challenging occupation.

Hannah Revoldt is the daughter of Jason and Vicki Revoldt of Almont Township. Hannah Revoldt has earned a ranking of eighth in the Almont Class of 2021 with a grade point average of 4.034. Hannah is a two-year member of the student council and loves to play pretty much any sport. During her high school career, she played four years of varsity soccer, three years of varsity basketball and two years of varsity golf. Hannah was team captain in basketball and earned All-Conference Defensive Team accolades for two years. During her junior year the varsity golf team won the BWAC and regional championships and placed eighth at the state competition.

Hannah plans to attend Michigan State University or Grand Valley State University in the fall. At this time Hannah is unsure of her exact program, but she knows it will incorporate her math, business, and science interests. She is currently leaning towards one day practicing law in a specialized science or medical field.

Grayson Heiden’s parents are David Pape and Kimberly Heiden of Almont. Grayson has obtained a GPA of 4.0255 and earned the ranking of ninth in the Class of 2021. He participated in the Robotics Club for two years, Drama Club for three years, the Gender Sexuality Alliance for three years, and National Honor Society for two years. In his three years of drama his most notable role was Ms. Darbus in High School Musical. In the NHS he helped with blood drives, a book drive, a clothing drive, tutoring, the morning announcements, and checking names for COVID tracing at sports games. Grayson plans to attend Oakland University in the fall to double major in chemistry and creative writing.

Daniel James is the son of Ron and Carrie James of Richmond. Throughout the course of his high school career Daniel participated in varsity soccer for three years, and his overall GPA sits at a 4.009, ranking him as tenth in the Almont High School Class of 2021. Daniel’s stand-out award of his high school career is the Pre-Calculus academic award he received from Mr. Voyt. Further academic accomplishments include obtaining a top score of five on three Advanced Placement tests—AP U.S. History, AP World History, and AP Language. However, his crowning achievement is the knowledge acquired over his high school career. At this time, Daniel is undecided on the path which he will follow after high school.

Shane Bailey is the son of John and Roberta Bailey of Allenton. Shane is glad to have had so many opportunities in high school, such as his four years in the percussion section with the Almont Marching and Concert bands, four years with the Robotics team, serving as lead programmer for two years, and four years with the varsity soccer team. Shane took advantage of enrolling in the numerous Advanced Placement (AP) and his ranking as tenth in his class, his GPA of 4.009, and high SAT scores have led him to be college bound, but he believes that a major portion of his success was with his friends and family pushing him along his high school career.

Shane will be attending Grand Valley State University in the fall, to pursue a degree in computer science with the addition of a minor in computer engineering.

Editor’s note: Many thanks to Joyce Burkland, secretary to the principal at Almont High School, for compiling this feature.