Some Memorial Day events scaled back 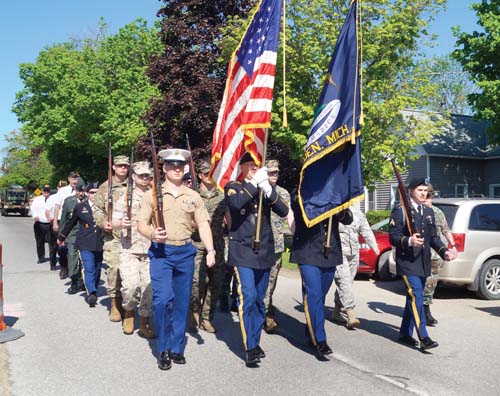 TRI-CITY AREA — After a one-year hiatus, most local veteran groups are planning scaled back Memorial Day programs for Monday, May 31. Due to the coronavirus pandemic, all 2020 traditional ceremonies were canceled. This year, those programs will return but some events will be smaller in scope than what was offered pre-pandemic.

The ceremony will include a prayer offered by Post Chaplain Mark Dipiola; the laying of a wreath at the veterans memorial; a traditional gun salute; and the playing of taps by members of the Almont High School band.

The public is welcome to attend. However, no seating will be available for attendees.

In Dryden, the Dryden Vets’ annual Memorial Day Parade will step off from its regular starting point at the Dryden Elementary School on Mill Street at 10 a.m.

After parading through the downtown district, Dryden Vets members will lay wreaths at both Memorial Park and the Mount Pleasant Cemetery.

The traditional Memorial Day ceremony will include placing wreaths and raising of the American flag, followed by a gun salute and playing of taps.

In Imlay City, a 10 a.m. ceremony will be held at the memorial at the corner of Fourth St. and Almont Ave. near the Ruth Hughes Memorial District Library.

The program will be shorter in length than what is usual. Members of the VFW and American Legion posts will then move on to conduct salutes at the Imlay Township and Mount Calvary cemeteries.

In Capac, as of press time organizers planned to not start their ceremonies with the usual parade. Instead, participants will gather near the memorial in front of Kaatz Funeral Home at 10 a.m. for a ceremony and proceed to the Capac Cemetery for a second program.

Anyone who has served or is currently serving and would like to participate in the May 31 ceremony is asked to meet at the American Legion Hall at 9 a.m. that morning.