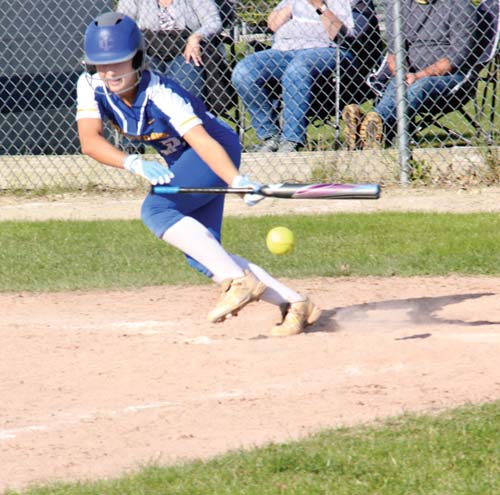 Jaya Forti, of Imlay City, lays down a bunt for her team during a game last week.

Jaya Forti (three singles) led Imlay City at the plate. She was backed by Natalie Stone, Skylar Stone, Lexa Forti and Abigail Thibodeau (two singles each) along with Emma Sellers.

Grace Schriber was the winning Imlay City pitcher. She allowed 12 hits over six innings, struck out five and walked one.

Imlay City then improved to 2-0 for the day, thanks to a 5-2 victory over Clio.

Makenzie Hayward was Imlay City’s pitcher of record. She gave up four hits over seven innings, retired six on strikes and walked one.

Imlay City then closed out their unbeaten day with a 7-2 championship triumph against Montrose.

Jaya Forti and Hayward led Imlay City with a pair of singles each. The Spartans also received a home run from Natalie Stone as well as a single apiece from Emma Sellers, Skylar Stone, Yesenia Rojas, Lexa Forti and Thibodeau.