Almont wins their own tournament

ALMONT — The Almont varsity softball team posted a 3-0 mark en route to a first-place finish last Saturday at the Raider Clash it hosted.

Almont opened their three-game tournament stint with a 12-1 win against Laker High School.

Kendall Roszczewski and Grace Koenig shared the pitching responsibilities for Almont. They allowed two total hits, struck out two and walked none.

Schapman (a pair of home runs) plus Wilson and Koenig (a single and a triple apiece) paced Almont with multiple-hit performances. Johnston (a double) along with Hannah Revoldt, Johnson and Hall (a single each) supported their performances. 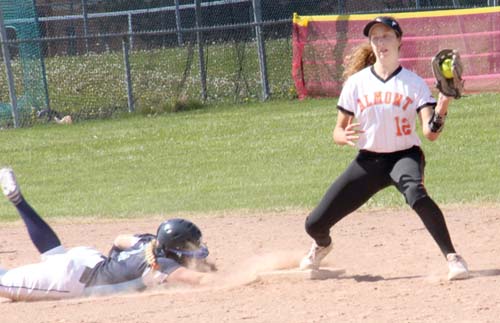 Johnston was the winning Almont pitcher. She gave up eight hits over six innings, retired four on strikes and issued two walks.

Almont then closed out their title-producing run with a 12-10 triumph against Lutheran North.

Both teams were 2-0 in round-robin play entering the matchup.

Schapman (two singles and a home run), Johnson and Koenig (three hits apiece), Johnston (a single and a double) along with Wilson (two singles) notched Almont’s top plate credentials. Roszczewski (a home run) plus Brandi Kautz and Hall (a single each) also reached the hitting column.

Roszczewski was Almont’s pitcher of record. She allowed 10 hits over seven innings, struck out one and walked eight.