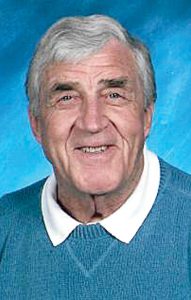 Jerry spent his early life in Owosso, graduating from Owosso High School in 1952. Jerry was an outstanding athlete, earning nine varsity letters in football, basketball, and baseball. He scored over 30 points in four different basketball games in high school. In football and basketball he was awarded with All-State and All-Saginaw Valley honors.

Jerry continued his education at MSU on a football scholarship, participating on the 1952-1953 and 1953-54 teams, coached by Biggie Munn. From 1954 to 1956, he proudly served his country in the U.S. Army during the Korean war, rising to SP2. After his discharge he resumed his studies at MSU, graduating in 1959 with a B.S. in Education. His first teaching position was at Ovid High School from 1959-1963 as well as varsity baseball and basketball coach and assistant football coach. In 1963 he moved to Imlay City, teaching history and driver’s ed, while coaching football and basketball until 1977. There he met his future wife of 56 years, Nina Rhiness, marrying her at Trinity Methodist Church in Lapeer on August 22, 1964. While teaching and coaching, Jerry earned a Master’s in secondary administration. He began his career in 1977 as principal of the Imlay City Junior High School, while also serving as Athletic Director of the Junior and High School. He retired in 1990 with 35 years in education.

After retiring Jerry went back to Imlay City and filled in twice for administrators on sick leave. He also coached lite weight football at Zemmer Junior High School from 1993 to 1998 and worked the Lapeer elections for over 10 years. In his free time, he enjoyed playing golf, betting on horses and slots, and following all sports, especially MSU football and basketball and the Detroit Lions and Tigers. He was a member of Lapeer American Legion, Post #16.

Jerry was most proud of his two sons and enjoyed watching them play sports from T-ball to varsity sports. He was an avid supporter of their education, careers and marriages. Their greatest gift to him are five wonderful grandchildren.

We would like to give thanks to the staff at the Pines of Lapeer and Nancy (Hospice) for their compassionate care. A special thanks and gratitude to our neighbor Liz, who prepared many delicious home cooked meals that she delivered to Jerry with the newspaper, which he loved to read.

Memorial contributions can be made to Trinity United Methodist Church, 1310 N. Main St., Lapeer, MI. 48446. In keeping with Jerry’s wishes, cremation services have been entrusted to Muir Brothers Funeral Home in Lapeer.