TRI-CITY AREA — Local districts are making plans to celebrate their 2021 graduates this spring and many of those plans look different for the second year in a row because of the pandemic. In 2020, some districts postponed their ceremonies to later in the summer but as of now, all are planning on spring dates.

In Capac, diplomas will be handed out in a similar fashion to 2020. Like last year, commencement ceremonies will be held outdoors in the football stadium. Currently, graduation is slated to happen this Sunday, May 16, at 2 p.m. The last day for seniors was Friday, May 7. The day was capped off with a rainy parade that night through downtown Capac.

In Dryden, the high school’s original calendar planned for lauding graduating seniors on Sunday, June 6 at 11 a.m. in an indoor ceremony but those plans were readjusted.

The date hasn’t changed but the time and location have. On the first Sunday in June, graduation ceremonies will be held on the high school’s Stremler Field starting at 5 p.m.

Seniors’ last day of classes will be Friday, May 21. After that an array of activities await Dryden’s Class of 2021. They’ll march in the Memorial Day parade, have an awards ceremony, parade through both school buildings and have their own parade through downtown Dryden on Friday, June 4 at 7:30 p.m. 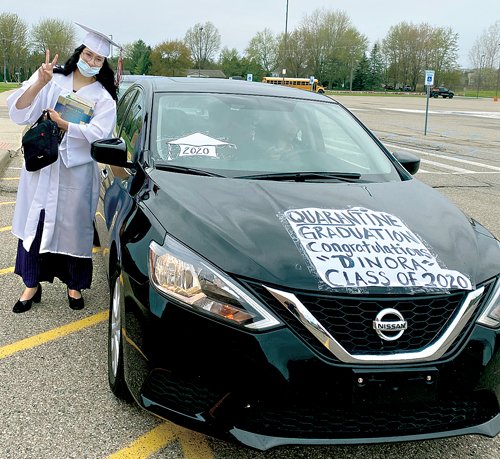 Almont 2020 grad Dinora Manick arrives for her photo appointment last spring. Seniors individually received their diplomas last year and photos of each, plus other clips, were combined into a video creation.

Similarly Dryden’s 2020 commencement was held outdoors but not until July.

Last year, Almont had planned to move their ceremony to the Bells Event Center and former home of Almont Elementary School. Due to pandemic restrictions that wasn’t possible so they opted for an appointment-type system where graduates signed up for time slots to receive their diplomas individually. Images were then used to create a video production that was published on the date and time of the originally scheduled ceremony.

In Imlay City, plans for sending off the class of 2021 have changed in recent weeks.

Originally, administrators had intentions to host four separate indoor ceremonies in the high school’s gym all on Sunday, June 6, with a limit of six guests per student.

A group of seniors urged district leaders to reconsider those plans and instead host one large outdoor ceremony. They provided a petition with signatures at Imlay City’s April Board of Education meeting.

After receiving guidance from the Michigan Department of Education, Imlay City Schools announced that commencement had been shifted to the football stadium with plans for two ceremonies on June 6, one at 1 p.m. and one at 4 p.m.

Capacity limits required that the seniors be split into two groups but this still allows seniors up to six tickets.

In case of inclement weather, a rain delay of 1.5 hours will be implemented or the ceremonies will be rescheduled for June 8 and June 10, respectively.

The last day for seniors will be Friday, May 21.

“We are looking forward to a positive end-of-year experience for the Class of 2021 and will do everything we can to support them in a strong finish,” Dr. Stu Cameron, superintendent, wrote in a letter to parents.