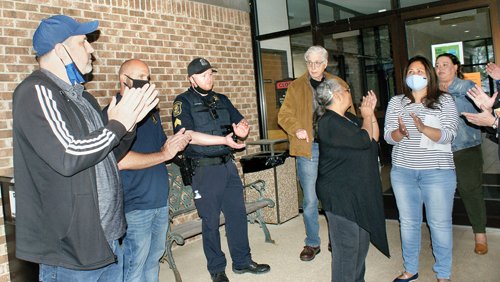 IMLAY CITY — After weeks of public discourse regarding the possible disbanding of the Imlay City Police Department, hundreds of Imlay City residents in opposition to such a move can now exhale a collective sigh of relief.

On May 4, Imlay City Commissioners unanimously (7-0) agreed to not pursue contracting with the Lapeer County Sheriff’s Department for police services.

In a motion made by Mayor Pro-tem Frank Demske and seconded by Commissioner Ted Sadler, commissioners decided to move forward with the process of interviewing candidates and hiring a new full-time police chief.

In the immediate aftermath of the decision, loud cheers and applause rang out inside and outside the Imlay City Hall.

The vote followed a written statement by Mayor Joi Kempf, who discussed the commission’s reasons for considering the potential benefits of a new arrangement with the Sheriff’s Department.

She stressed that it is the city commission’s responsibility to make tough decisions; some of which come with challenges and controversy.

“We and the city manager (Craig Horton) all have a job to do,” Kempf said, “and that includes the allocation of tax dollars.

“Law enforcement is going to be changing dramatically in the coming years,” she continued. “We need to be able to keep up with those trends.”

It was on March 25 that Horton, Kempf and ex-Police Chief Scott Pike met with current police officers to advise them that the city was exploring the option of contracting with the Sheriff’s Department.

However, almost immediately residents began railing against the idea by expressing their opposition verbally, in social media, and by posting signs supporting the city’s police department in their yards.

While waiting for a formal proposal from Sheriff Scott McKenna., Kempf hosted one-on-one sessions with citizens.

Meanwhile, large numbers of residents showed up at recent city commission meetings to further express their opposition to disbanding the police department and to be present in the event of a vote.

On Saturday, April 24, more than 700 people attended a rally in the Shopko parking lot; signing petitions and waving placards in support of local police.

Support for the hometown department galvanized again on April 29, when about 250 people participated in a community forum at the Eastern Michigan State Fairgrounds.

City commissioners listened patiently for most of the meeting, but tempers and emotions began to take their toll as the evening wore on.

After four-and-a-half hours and repeated calls for a vote from frustrated citizens, the meeting ended without city commissioners taking action.

It was near the conclusion of the May 4 meeting that Kempf issued a statement on behalf of city commissioners.

“I believe that continuing to move forward with hiring a new full-time police chief and taking an active role in making the Imlay City Police Department the most fiscally-sound and hardworking department possible while offering services and safety to our residents, is what is best for our community at this time.”

At that point Kempf asked if any commissioners wanted to continue discussion with the Lapeer County Sheriff’s Department.

Hearing none, Kempf offered the motion to move forward with hiring a full-time police chief.

Krueger will also be charged with interviewing candidates for the full-time post vacated by former Chief Scott Pike who retired on April 30.