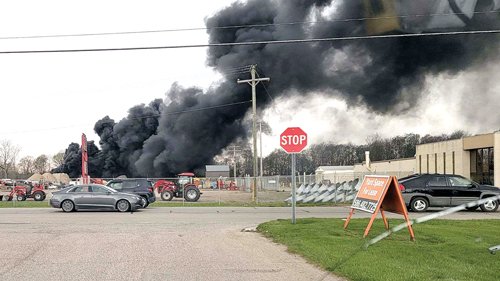 The black smoke emanating from a tire fire behind Novak’s Supply on M-53 required the response of five fire departments and the application of an encapsulator agent to extinguish the fire.

EPA is called in to investigate
environmental impact of fire

ALMONT TWP. — More than 40 firefighters from five local departments responded Saturday, May 1 to reports of thick, black smoke rising from an area behind Novak Supply at 2630 Van Dyke (M-53).

Almont Twp. Fire Chief Don Smith reported that firefighters were called to the scene at around 2:40 p.m. to discover what appeared to be a tire fire.

Smith said mutual aid was provided at the scene by fire crews from Imlay City, Attica, Dryden and Berlin townships.

Due to the type and challenges presented by the fire, Smith said a crew from Hazard Control Technologies was called in to assist.

He said the HCT crew used 60 gallons of “F-500 encapsulation agent” to finally extinguish the fire.

Smith said firefighters were not able to leave the scene until around 7 p.m.

Representatives from the Michigan Environmental Protection Agency (EPA) are expected to conduct an investigation of the fire regarding its legality and possible impact on the nearby environment.

“That was an expensive fire to put out,” said Smith, who anticipates that an investigation will be forthcoming.

The F-500 Encapsulator Agent is not a foam and contains no fluorinates. The agent is reported to be 100% biodegradable and is non-hazardous to the environment.

They included responding to a personal injury accident, assisting the Imlay City Fire Dept. for wires down, and two incidents of illegal burns.