MDOT fails to see the light on traffic signal 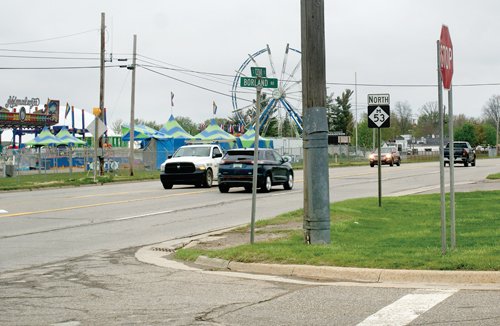 Representatives from MDOT continue to say that the current traffic flow and rate of serious accidents does not meet the state’s criteria for the installation of a traffic signal at Borland Rd. and M-53.

IMLAY CITY — The chances of MDOT (Michigan Department of Transportation) installing a traffic signal at the corner of M-53 and Borland Road appear as unlikely now as they were 20 years ago.

On April 23, representatives from MDOT met at the city hall with Imlay City and Lapeer County officials to discuss ongoing traffic issues on Van Dyke — including the installation of a traffic signal at the intersection that connects the city’s new fire hall to the main thoroughfare. The Imlay City Fire Department moved into their new home in late 2020.

Based on that discussion, Craig Horton is not optimistic about what conditions could change in the immediate future to warrant the installation of a signal.

“A number of (Imlay City) representatives questioned MDOT representatives concerning a traffic light at M-53 and Borland,” Horton said. “They (MDOT) explained why the intersection does not meet the criteria for a light.”

Horton said MDOT officials continue to view construction of a boulevard near the Kroger Plaza as a way to reduce traffic issues and the number of collisions along the busy stretch of highway.
Such a plan, however, is not on MDOT’s radar nor in its annual budget until 2026.

“They see the benefits of a boulevard and would like to present such a proposal to property owners along M-53,” said Horton.

He added that the MDOT officials offered clear and specific numbers about how many fire runs it would take to get a light at the intersection.

“They explained the type and number of accidents we now see on M-53,” Horton said. “They said that unless a large retailer or other development goes in along Borland Road to change the traffic count, the corner does not warrant a traffic light.”