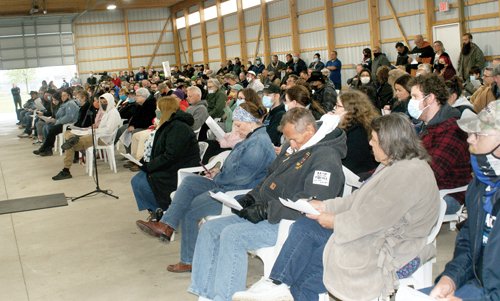 IMLAY CITY — By 6 p.m. on April 29, hundreds of Imlay City residents had gathered inside the FFA barn at the Eastern Michigan State Fairgrounds to voice their opinions about a proposal being considered by city commissioners to disband the Imlay City Police Department.

City Manager Craig Horton said it was his idea to consider the option and potential financial benefits of contracting with the Lapeer County Sheriff’s Department.

Horton said the city will experience a budget shortfall of $400,000 next year, due to an equivalent reduction in tax revenues from the State of Michigan.

That loss will be offset somewhat when the city receives the first of two installments totaling $352,000 in federal COVID Relief funds; the first half ($176,000) which is scheduled to arrive in mid-May.

Grant admitted that he had only recently been appraised of Imlay City’s police issues, while Stowers rendered her legal opinion that dissolving the Imlay City Police Department is allowable per language in the city’s charter.

That opinion was challenged later in the meeting by veteran Lapeer County attorney Phillip Fulks, who resides in Imlay City.

Also serving on the panel was Lapeer County Sheriff Scott McKenna, who told attendees his role was to provide accurate information regarding the proposed shift in police coverage.

“I understand there’s an emotional side to this,” McKenna said. “I’m not here to argue or yell. I’m here to discuss the options and to answer your questions with facts.”

In recent weeks, McKenna had consistently said that Imlay City residents would have increased coverage, and at less cost to city residents.

While his proposal had not yet been reviewed and digested by all city commissioners, McKenna estimated the city could save as much as $400,000 by contracting with the Sheriff’s Department.

“It’s up to your board to decide what is best for Imlay City,” said McKenna. “They are the people who were elected to make that decision.”

For the next three-plus hours, Mayor Joi Kempf took the gavel as an unending stream of residents strode to the microphone to offer their opinions about what is best for Imlay City.

Paul Walker, a 35-year resident, opined that only Lapeer County, not Imlay City, would benefit from the proposed arrangement.

“If this happens we will be relinquishing our local control to Lapeer County,” Walker said. “We should not give up what we now have to the county.”

Resident Adam Villanueva expressed frustration with the process, which has gone on for weeks without a vote.

“We’ve sat out in this barn in 48-degree temperatures for four hours, and the people have spoken,” Villanueva said. “We’ve exhausted a lot of time on this and it’s time to move forward. This is tearing our city apart.”

Lifelong resident and past commissioner Al Ramirez asked commissioners to consider the non-financial and intangible costs of disbanding the city’s police department.

“This issue is bringing out the ugly side of people,” said Ramirez. “You must be able to understand why they are upset.

“Why try to fix something that’s not broken,” he asked. “You need to vote on this and put this whole issue to rest.”

While several people in the audience called for a vote, no motion was forthcoming.

The matter of disbanding the police department could have again come up for a vote at yesterday’s (May 4) regular meeting.

At that meeting, commissioners were expected to adopt a proposed $7.7 million budget for the 2021-2022 fiscal year.