ALMONT — Sydney Torres, 2017 Almont High School graduate, has capped the first step in her postsecondary career with a prestigious honor.

The biomedical sciences major will attend the University of Michigan medical school. This spring she concludes an impressive four years of academic success and volunteer service at OU. 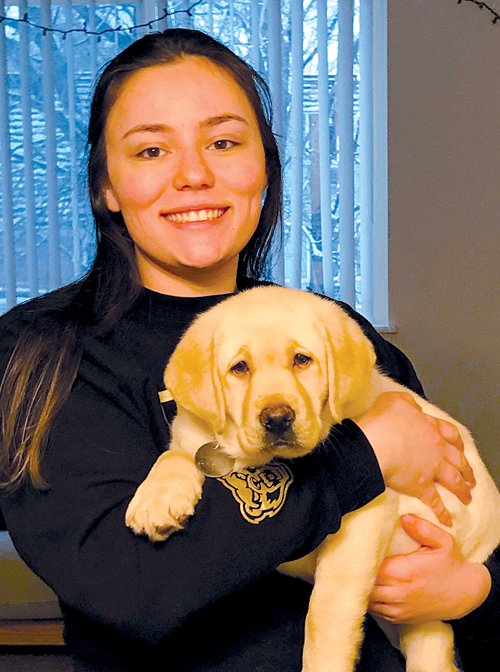 Sydney poses for the photo with Summer, a Leader Dog that she’s currently raising.

“I have had an amazing experience furthering my education at Oakland. My academic success and opportunities to be involved and gain leadership experience was definitely made easier through the support that I got from faculty mentors at the university and the opportunities that the university provided. It means a lot to have even been nominated for the award,” Sydney said.

The Raider alumnus had a long list of accomplishments that obviously impressed the award judges.

Sydney was president and secretary of the school’s Pre-Medical Society and conducted research on thromboembolism, a blood-clotting disorder, in the Department of Biological Sciences. As a member of OU’s Honors College, she wrote an honors thesis on her research and was a Teaching Assistant, Dean’s Student Fellow and participant in the Presidential Scholar Medallion program.

As for academic honors, Sydney received the Honors College Merit Scholarship, OU Credit Union Honors College Dean’s Choice Spirit of Discovery Award and HC 3900 Thesis Competitive grant. She was also a puppy raiser and secretary of OU’s Leader Dogs for the Blind chapter and a member of the Alpha Lambda Delta Honor Society chapter at OU.

As part of the university’s MEDLIFE chapter, Sydney took part in a trip to Peru where she helped set up medical clinics and rebuild a house.

Outside of OU, Sydney attended a University of Michigan-sponsored MCAT preparation course with a diverse cohort of students while learning about systemic issues and potential solutions for the healthcare system. She is also a nursing assistant at Beaumont Health and has donated her time as a playroom volunteer and volunteer trainer at Children’s Hospital of Michigan, a reading and literacy mentor at Pontiac’s Center for Success and a kitchen volunteer at Grace Centers of Hope.

As impressive is her list of extra-curricular activities, Sydney said they served an important role in helping shape her plans for the future.

“I was involved in outside volunteer and extracurricular activities because they helped me get a sense of the career that I wanted to pursue and helped me grow as a person. By volunteering in underserved communities or with organizations that I was interested in, I was able to understand some issues beyond my personal point of view and learn how individual people can be a part of larger projects to help make positive contributions and changes,” she said.

“Without all of the experiences that I had beyond my academics, I can definitely say that my perspective on medicine and life in general would be a lot different, and I’ve gained some of my most meaningful experiences and moments from those outside activities.”

Sydney is quick to praise Almont Community Schools and her teachers for helping her to realize these achievements.

“From having teachers and staff who cared about our success to even the lessons that I learned through outside involvement in high school including sports and student council, I think that Almont Schools prepared me beyond even academically,” she said.

“There are certain teachers at Almont Schools who I will always remember as having made an impact on my academics and success, and I cannot thank them enough. School is what you make of it, and I think because I had a great support system within and outside of school at Almont, I was able to learn from those experiences to get involved and seek similar mentors during my time at OU.”

Sydney said she’s still considering her options when it comes to what field of medicine she’d like to practice in.

“I do know that I hope to find a profession that suits my goals and passions to help make a positive change within the field of medicine,” she said.

According to a press release from the university, the Alfred G. Wilson and Matilda R. Wilson awards have recognized OU’s top male and female scholars and leaders since 1965. The awards commemorate the Wilson family, whose generous donation of land and financial resources helped establish the university in 1957.

A committee reviews nominations from faculty, staff and students and selects the award recipients. Recommended candidates are ultimately approved as honorees by the vice president for student affairs and chief diversity officer, and the president of OU.