CAPAC — In February 2020, management and employees at Keihin Michigan Manufacturing in Capac were informed that the plant would be shutting down in 2021.

Since that announcement, KMM had gradually whittled down its former staff of 165 employees to a number sufficient to continue meeting preexisting contractual demands and obligations.

A week ago, Plant Manager Bo Shirling announced that Thursday, April 22 would be Keihin Michigan’s final day of full production.

In an effort to help Keihin associates transition and find other employment, KMM management recently hosted an open house for representatives from other businesses and manufacturers to recruit and potentially hire Keihin employees.

At noon on Thursday, Shirling met with his remaining Keihin associates to share some parting thoughts and words. 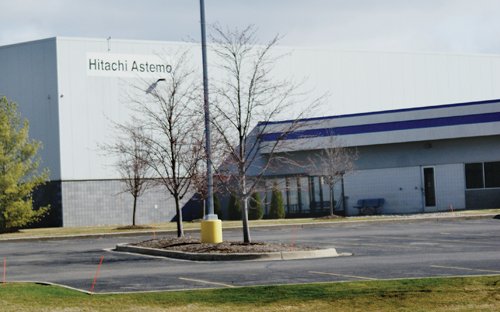 New signage at the now shuttered Keihin plant reflects the company’s merger with Hitachi in late 2019.

Keihin Michigan Manufacturing had been in operation in Capac since 2008.

KMM’s demise could be traced back to the merger of Honda Motor Company and Hitachi Ltd. in 2019.

At the time, Honda and Hitachi had agreed to merge four of their car parts businesses to create an independent components supplier with almost $17 billion in sales.

Under the terms of the merger, Hitachi owned two-thirds of the new entity and Honda owned one-third.

However, due to market changes and a shift toward electric vehicles, automakers and suppliers found themselves having to pool their resources; leading to insurmountable challenges for some.

Though Shirling and fellow associates held out hope that KMM could survive the market changes, it became apparent about one year ago that the plant’s closing was imminent.

On Feb. 4, 2020, KMM Corporate headquarters released a statement confirming that operations at the Capac plant would cease in 2021.