More than 700 rally to save police 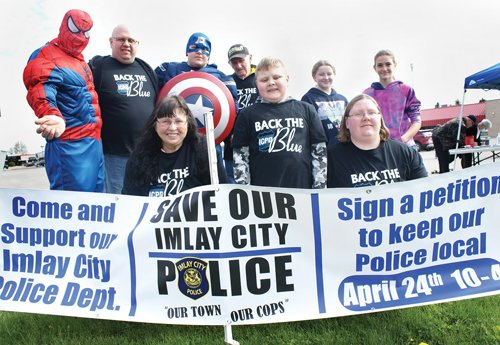 Organizers of the ‘Save the Police Rally’ unveil a banner supporting the Imlay City Police Department at the outset of the event.

IMLAY CITY — High school students Jesus Soria and Noe Ortega were among the first to sign a petition in support of the Imlay City Police Department at Saturday’s ‘Save the Police’ rally in the Shopko parking lot.

Soria and Ortega, both 18 and lifelong Imlay City residents, explained why they favor keeping their hometown police force.

“We feel very comfortable with our current police officers,” they said. “We’ve lived here all of our lives, and we’ve grown up with them.

“I feel like we know them and that they know us,” they said. “There is a respect there.”

The six-hour rally attracted a steady stream of residents who stopped to sign the petitions, purchase ‘Back the Blue’ signs and express their overall opposition to the city’s proposal to disband the Imlay City Police Dept. and contract with the Lapeer County Sheriff’s Department.

Some in attendance contributed to a legal fund established to challenge the efforts to dissolve the city’s police department.

Phillip Fulks, a local attorney and Imlay City resident, spoke on behalf of those gathered for Saturday’s rally.

“The large number of citizens who turned out were generous with their support,” Fulks said. “I believe that defunding our Imlay Police and contracting with the Sheriff department is a dangerous idea.

“Our residents wanted to know ‘why’ would our city’s mayor and management want to change something that has worked so well in our community for decades.

“Many people who were there described moving from other towns that used to have their own police and later contracted with a Sheriff’s department.

“They said that the cost escalated, the service declined, and that crime increased.

“The absence of crime is one of the reasons we move to and want to live in Imlay City,” Fulks continued. “It’s about having and maintaining our quality of life.

“That includes having our own hometown police department.”

The issue could come to a vote on Thursday, April 29 at 6 p.m. at the Eastern Michigan State Fairgrounds, when city leaders host a community forum.

In the event of inclement weather, the forum is expected to be moved inside the Walker Building at the fairgrounds.