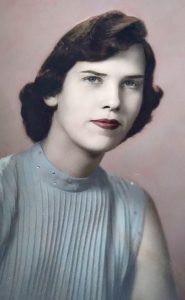 She was affectionately known as a stubborn spitfire, but she was a woman of many talents. She could work a horse, multitask in an office, drive heavy machinery, waitress, while raising a family.

There will be no memorial or funeral services. She will be laid to rest at Ferguson Cemetery next to her husband, Paul.