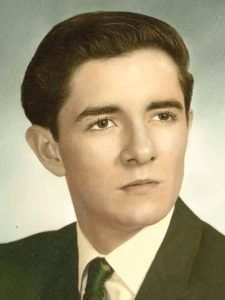 Daniel “Danny” King, age 72, of Metamora, MI died Thursday, April 22, 2021 at Metacare Inc. of Metamora, MI. Daniel Lawrence King was born September 1, 1948 in Detroit, MI. He was the son of the late George and Mary (Conway) King. Danny grew up in Detroit, MI until 1964, when he and his family moved to Dryden, MI. He was a graduate of Dryden High School, Class of 1967. While in high school, Danny was employed by the Metamora Hunt Club and helped to groom horses and clean horse stalls. He proudly served in the United States Navy aboard the USS America from 1968-1972, during the Vietnam War.

He was employed as an assembly line worker for T.R.W. in Sterling Heights, MI before his retirement.

He is survived by his mother, Mary King of Dryden, MI; sister, Cathy (Rich) Cowell of Imlay City, MI; niece, Morgan Cowell and his daughter, Amanda.

Danny was preceded in death by his father, George King; and his brother, Kenny King.

Due to recent health concerns of the COVID-19 pandemic, social distancing (six feet apart), masks (to be worn at all times), and limited occupation (25 people at a time) of the funeral home will be enforced.