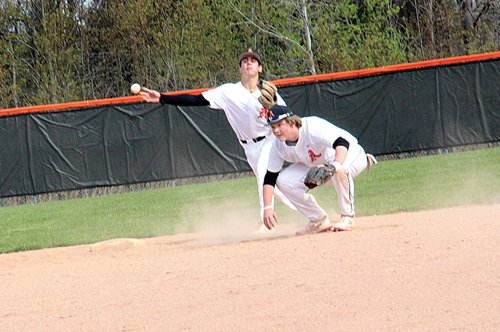 Almont’s Trenton Kruse looks to throw out a runner as Kylar Fisher looks at Saturday’s tourney.

ALMONT — The Almont varsity baseball team posted a 2-0 mark en route to a first-place finish last Saturday at a tournament it hosted.

Almont started their two-game stint with a 10-5 win at Bad Axe’s expense.

Brenden Haldeman (two singles and a double), Donovan Galovich (a single and a double) and Charlie Koenig (a pair of singles) led Almont with multiple-hit performances. They were backed by Reis Stine (a double) along with Kylar Fisher, Nolan Idyle and Landon Kruse (a single each).

Cody Koval was Almont’s pitcher of record, prevailing in relief of Idyle. They gave up five total hits, struck out one and surrendered seven walks.

Almont then closed out a 2-0 day with a 4-3 victory over South Lyon.

Conger got the win in relief of Fisher and Hunsaker. They allowed retired seven on strikes and issued five walks en route.