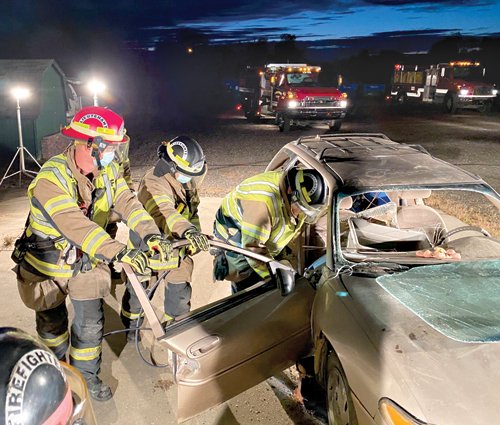 Dryden Township firefighters work together during a training exercise to hone their extrication skills.

DRYDEN — Dryden voters will head to the polls next month where they will be asked to approve the township’s fire millage. The current fire millage (.97) expires this year and the proposed new millage is 1.25 mills.

“We are hoping that the community will come out in strong numbers to support the millage,” he said.

Napolitano said the call volume at the department has been on a steady increase over the last five years. The Dryden Twp. Fire Department responds to all fire and medical calls. Response to structure fires, wildland fires, chimney fires, downed power lines, tornado warnings, smoke investigations are just a few of the duties performed by the Dryden Township Fire Department. Often, Napolitano says, the first responders from the department are the first ones on the scene.

The Department is volunteer based, currently having 28 members. The volunteers consist of both firefighters and medical first responders. Volunteers wear pagers and are on call 24/7.

Napolitano credits the millage for the ability to respond at any hour. “The millage is used for our day to day operational costs. We are singularly dependent on this millage to operate,” he said.

After responding to a call, the fire department does not bill Dryden Township taxpayers for services rendered. All support is covered through this millage.

While the fire department responds to both fires and medical calls, they also play a big role in the community. Napolitano is proud of the department’s involvement in events such as Dryden Boom Days, MDA’s Fill the Boot, being on standby at football games, helping to provide safety on Halloween during Trick or Treating and more.

For more information about the fire department, visit http://www.drydenfiredepartment.com.