Some eligible veterans still not applying for earned benefits

LAPEER COUNTY — Vietnam veteran Jack Reed, 75, and his wife, Diane, have lived in Lapeer County for more than 40 years.

It took all of that time for them to seek out information about the various benefits and services Jack qualifies for as a veteran of the U.S. military.

This week, the Reeds met for the first time with Cheryl Burrough, who has spent the past 27 years employed at the Lapeer County Veterans Affairs office in downtown Lapeer. When Burrough arrived on the scene, she served as the secretary for Lapeer County VA Director Jose Ramirez, when the entire department was administered by just two people.

On Thursday, April 1, Reed attributed his delay in visiting the Lapeer VA office to the expectation that doing so would be convoluted and time-consuming.

“I thought it would be a long and drawn-out process,” Reed said. “But she (Burrough) has been very helpful to us and everything has been going very quickly.”

Lapeer County Veterans Affairs Director Pete Kirley said Reed is just one of many Lapeer County veterans who have put off applying for various benefits they have earned. 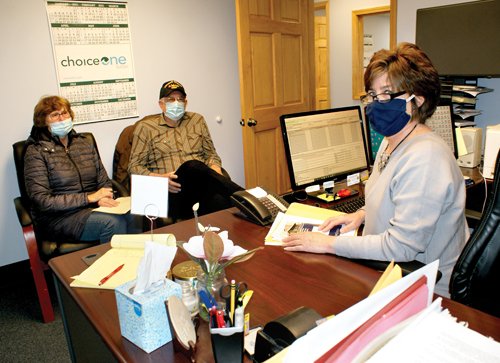 “One of the biggest hurdles we face is to get people in the door,” Kirley said. “There are still a lot of veterans who never come in to learn about what is available to them.”

Based on 2020 census numbers, Kirley said about 5,700 veterans reside in Lapeer County; about two-thirds of whom are Vietnam-era age and older.

“Unfortunately,” he said, “too many of them are not accessing and receiving the benefits and services they are eligible to receive.

Kirley, a 33-year veteran of the U.S. military, said he is committed to ensuring that each and every Lapeer County veteran gets his or her due reward.

That includes providing older and disabled veterans transportation to and from their medical and doctor’s appointments; which can include the Yale VA Clinic and VA Medical Centers in Saginaw, Detroit and Ann Arbor.

To assist those needing rides, the Lapeer Veterans Affairs office is supported by a loyal cadre of volunteers who do the driving.

Kirley said the Lapeer County office is in the process of acquiring a 2021 Ford Transit van, funded in part through a state grant program.

Once the agency takes possession of the new vehicle, which is expected to occur later this month, it will offer sufficient space for two wheelchairs and four ambulatory patients.

“That will be a huge plus for local veterans and for our volunteer drivers,” said Kirley.

He pointed out the agency has been using a vehicle provided by the Lapeer County Community Mental Health Department.

“It’s very important to us that our veterans get to all of their appointments,” Kirley said. “No matter where or how far they need to go.”

Kirley stressed that there is always a need for additional volunteer drivers.

“There is a continued need,” he said. “Our runs have been going non-stop. We need people to fill in if others are not available.

“We currently have about 14-15 drivers, but we welcome any responsible, safe drivers who are willing and able to help out.”

He pointed out that volunteer drivers are subject to simple background checks and their driving history.

Kirley said veterans’ needs tend to vary significantly, based on their ages and individual financial and health conditions.

“They are looking to find employment, schooling and resources to get them started,” he said. “Many of them can just use some support, guidance and a helping hand. In those cases, we’re here to listen and help facilitate the things they need.”

He pointed out that some veterans are either embarrassed about their circumstances or are resistant to accepting help from the VA, or anyone else.

“We’re always ready and willing to help,” said Kirley, “but it’s up to them to come in and talk to us.

“Fortunately, I do believe veterans are more likely to trust and listen to advice or suggestions from another veteran because of the bond they share.”

Kirley is very proud to show off the Lapeer County Veterans Affairs Department’s newly-renovated offices in downtown Lapeer, in the building next to the historic Lapeer Courthouse.

The physical transformation took place last summer and included reconfiguring the space to include a vestibule with seating and multiple office spaces.

The offices were also repainted, recarpeted and boast all new furnishings.

“I think public perception is very important,” said Kirley. “Now, our veterans can walk in the door into a a professional and comfortable environment. They deserve that.”

Once the pandemic is finally in the rear-view mirror, Kirley hopes to initiate some new outreach programs and resume those that have been successful in the past.

One of those included annual bus trips for veterans and their spouses to the Great Lakes National Cemetery in Holly.

Kirley said that when conditions are rendered safe, the department intends to restore that program and others.

The Lapeer County Veterans Affairs Office and its programs are funded through a 1.85-mill tax levy, which generates about $565,000 annually.

To speak with a VA representative or to make an appointment, call the Lapeer offices at 810-667-0256.

Pete Kirley can be contacted directly at 810-245-3623 or via email at pkirley@lapeercounty.org.