Residents rally in support of police

Last month City Manager Craig Horton and Mayor Joi Kempf informed the police department that the city was exploring the possibility of contracting with the Lapeer County Sheriff’s Department, which they believe could provide residents with better police coverage at reduced cost.

In the opinions of those assembled Tuesday, any potential cost savings would pale to what would be lost in terms of public safety and community relations. 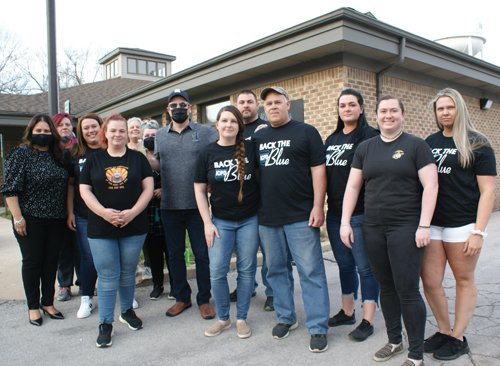 Residents assembled outside the Imlay CIty Hall on April 6 to show their support for the Imlay City Police Department. Many others voiced a similar message to city commissioners inside the hall.

Among those opposing the dissolution plan was Amanda Jackman, the daughter of deceased Imlay City Police Officer, Kevin Homer.

“I obviously have very strong feelings about this,” said Jackman, “but this is something that affects all of us. To think that the Sheriff’s department can do a better job is totally unrealistic.”

“I used to work at Lapeer County Central Dispatch, and I can honestly say that Imlay City Police had one of quickest response times in the county,” she said. “The community policing we have in Imlay City is especially important to our youth and young adults.

“Our police officers connect directly with our young people,” Jackman added. “They know people’s situations and can help keep them on the right path.”

Also offering support for the police department was Kristie Torres, who works at the Imlay City Post Office.

“I’m a letter carrier and I walk these streets every day,” Torres said. “I feel safe knowing our police officers are always nearby.

“This idea is wrong on so many levels,” Torres added. “It makes no sense to me and I’m suspicious about why this is even being considered.

“Who is it that stands to benefit from contracting with the Lapeer County Sheriff’s Department? I know it’s not our residents.”

In earshot of the conversation was Ray Jackman, who said he met one-on-one last week with Mayor Kempf.

“I feel this has all been handled in an underhanded fashion,” said Ray. “I asked her (Kempf) whatever happened to ‘we the people?’”

“She just danced around my questions. I think we need to take this to a vote of the people.”

Several residents expressed doubts regarding the Sheriff Department’s ability to respond to calls with the same immediacy and commitment of Imlay City police officers.

Muhammad Mughal, owner of the Exxon gas station at the corner of Almont Ave. and E. Capac Rd., shared his personal experience with Imlay City police, including as it relates to response times.

“We had a robbery at the station and the police arrived in 1 minute and 40 seconds,” Mughal recalled. “Within an hour of the robbery, they had caught and arrested the guys who did it.

“I feel safe knowing we have our own police department,” he said. “They work hard for all of our residents.”

Inside the city hall, where a regular city commission meeting was taking place, concerned residents were allowed to enter in small numbers due to COVID protocol, with no more than 15 allowed in the room at the same time.

Among those expressing their opinions at the meeting was longtime city resident Ted Collom, who himself served stints on the Imlay City Commission.

“I’m very much in favor of retaining our police department,” Collom said. “These officers know the residents and their situation, and are able to defuse a problem before it gets out of hand.

“I think you need to take into consideration the opinions of all the people who are here tonight,” he continued. “I believe our current department does a good job and serves our community well.”

Resident Lynn Nolin expressed puzzlement to the suggestion that the city police department be dissolved.

“I don’t understand why you are doing this?” she asked. “These officers know us and we know them. We have a relationship with them, so why do you want to destroy that relationship?”

Nolin speculated about the motives some may have for eliminating the city’s police force.

“I think this is more than a money thing,” she opined. “You (commissioners) need to accommodate the people.”

Mayor Kempf indicated that the matter would be taken up again at a future meeting.

She said earlier that no decision would be made until the Sheriff has the time and opportunity to present a plan to the city commission.