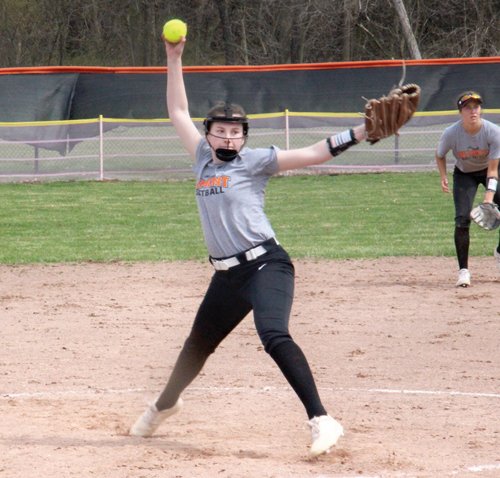 Lydia Lacavera, of Almont, delivers a pitch to home plate during a doubleheader Saturday with Port Huron Northern.

In the opener, Almont dropped a 12-9 verdict to Port Huron Northern.

Grace Koenig (three singles and a double), Devin Johnston (a single, a double and a triple) and Lydia Lacavera (a pair of singles) led Almont with multiple-hit efforts. The remaining Raider hits went to Samantha Leid and Sarah Hall (a home run each), Kendall Roszczewski (a double) and Grace Johnson (a single).

In the second game, Almont bounced back with a 21-10 win at Port Huron Northern’s expense.

Johnston and Koenig (five apiece), Hall and Johnson (three each), Leid (two) along with Roszczewski and Henige (one apiece) contributed Almont’s runs.

Roszczewski was Almont’s pitcher of record, prevailing with assistance from Lacavera and Johnston.

With the outcome, Almont stands at 1-1 this season.