Garrett Toombs, 25, is a quiet, polite, determined and intelligent young man. Oh, and he likes to go fast, just as fast as whatever he is driving at the time can go.

His father, Glenn, says, “Garrett has always had a very real need for speed.”

Garrett was riding motorcycles at age 5, leaping snow drifts on his snowmobile at 10 and challenging adults at the bump-n-run derbies at the county fair in his teens. He has little fear, likes to win and loves to go fast. Garrett, an Imlay City native, is very comfortable behind anything he can steer. 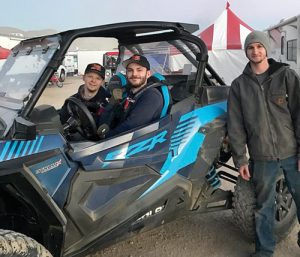 The off-road racing team of Ray Murawski, Ryan Dockham and Garrett Toombs tested their skills in the desert of California.

Garrett, and his friends often travel to Michigan’s Drummond Island or any one of the numerous off-road locations in Michigan to challenge the rugged terrain in a variety of vehicles. Off-roading is very popular these days not only here in Michigan but across the country.

Like always, Garrett needed to take it up a notch or two. The “need for speed” urging him on always.

Rather than ride the off-road parks at a leisurely pace, he and his high school pals, Ray Murawski and Ryan Dockham, began talking about some real off-road racing. One race in particular became the focus for the trio, “King of Hammers.”

The “King of Hammers” is one of the largest off-road events in the country. It’s held each year in the wide open spaces of Johnson Valley, a desert surrounded by mountains a few hours east of Los Angeles, California.

The race was started in 2007 on the back of a napkin. Over 50,000 people have been estimated to attend, watching several hundred machines run the 130 mile course.

Off-road racing is a type of racing that is held in locations such as mud, riverbeds, sands, deserts, snow, mountains, rocky slopes and other natural terrains. Vehicles like jeeps, trucks, motorcycles, ATVs, UTVs are all used in this enormously popular sport.

Desert races are mostly set up on government recreational lands. These lands usually have tracks that run from 25 to hundreds of miles. Different classes of vehicles run a different number of laps. This can depend on the size of the engine or on the setup of the suspension system.

“It started out as just a cool thing to do someday; the more they talked about it, the more serious and excited they got about the race,” Glenn told me.

For Garrett, who makes his living re-furbishing and rebuilding robots, paying close attention to detail is what he’s used to doing.

With the big race drawing closer by the day, Garrett bought a CanAm Maverick side by side, added a roll bar, racing seats, window nets, top of the line shocks, and added all the safety requirements.

Ray, Ryan and Garrett worked all hours of the night on the side by side, transforming it into off-road racing condition. They knew only a third of all the vehicles entered would be able to finish the 130 mile course. The rugged course is demanding on both driver and vehicle.

Off-road racing is unlike any other sport in the world. The drivers put their lives at risk every time they get behind the wheel. Pressing their foot on the gas, reaching speeds of 90 m.p.h in the desert, to a mere crawl in the foot of the mountains; they have to contend with all kinds of obstacles and sharp turns. One wrong move and they may never race again. For Garrett and people like him, this only adds to the wonder and excitement of the sport.

Off-road racing is unique from the standpoint that anyone can get into it. And while the skills and abilities necessary to compete at a very high level are very real, it’s not a sport that you need to train for your entire life to get good at. All you need is a passion, commitment and dedication to give it your all, some wide-open desert and tough terrain, a well-built race vehicle and good support crew around you. Oh, and a pocket full of money.

Garrett, Ray and Ryan completed the UTV, loaded it and packed supplies, tools, and sleeping bags in a borrowed trailer for the long drive to the famed, “King of Hammers” race. The trio would log a few thousand miles from Imlay City to what’s known as “Hammertown” in California and back.

Hammertown springs up in the desert every year in late January early February, seemingly overnight. It’s a city of generators, RVs and trailers 20,000 strong during COVID; otherwise known to grow to nearly 50,000 people. Hammertown has most anything a off-road racer would want, from parts for their vehicles to vendors selling food for the racers.

“It’s quite a sight, Garrett told me, “I’ve never seen anything like it.”

Garrett, Ray and Ryan made the long cross-country trip in a few days. Glenn would round out the team, flying out a few days later to join the crew.

Ray and Glenn were the trusted pit crew and Ryan was co-pilot in the vehicle assisting Garrett.

The first step is the pre-run, getting to know the course—70 miles of it in the desert and 60 miles which included rock trails, huge boulders and ledges to complete the course.

“The pre-run is pretty important, it allows us to get a feel for the course. The desert portion of the race is fast, reaching speeds of 90 mph, while the rock trails are more precise,” Garrett told me.

“It was intense. The whoops—a series of hills and dips—require some getting used to, you want to avoid too much air time. We did some shock tuning for sure,” he says.

Qualifying is the second step to their introduction to “King of the Hammer.” This is timed to see where you will start in the actual race. Garrett and his crew had the 54th fastest time, out of nearly 120 in his classification.

After doing better than they thought in the timed qualifying, attitudes changed a little.

“Garrett went from a weekend warrior mentality to his often seen racing mentality,” his father stated.

“Ryan saw it on race day, he knew Garrett was going to push it, to pull off the impossible. Garrett was looking to be a racer, not a chaser,” Glenn said.

Ryan pulled his seat belt and safety straps a little snugger, preparing for one crazy ride.

Ray and Glenn had tuned the machine and now it was time for Garrett and Ryan to perform as well.

And they certainly did. They started the race in 54th place and after 76 miles they had moved up to 31st place. Pulling in for a pit check they discovered a skid plate fell off and they would not be able to continue in the race.

Their first “King of the Hammers” was over. Not being able to finish is not uncommon in off-road racing, only 41 out of the 117 entered were able to complete the grueling race.

“Yeah, it was pretty exciting, we’ll be back. We all learned a lot and I think this will be a regular thing with us,” Garrett stated.

“For starters, I think the next time we go, we’ll rent a motorhome. We didn’t realize how cold it gets in the desert,” Garrett says.

In January the desert temperatures is in the 60s during the day and dips to the mid 20s at night.

“We got a little cold and that trailer was like a refrigerator,” he said chuckling.