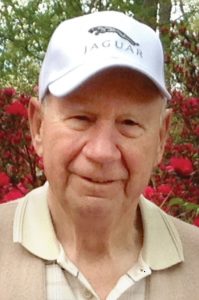 Edgar Arthur Thomas, 94, passed away April 9, 2021 after a long illness. He was born July 27, 1926 in Ray Township, MI to the late Edward and the late Catherine Thomas. He had 10 brothers and four sisters who all preceded him in death. Ed attended Romeo Schools until he joined the United States Navy in 1945. He was posted to the USS Bremerton and sailed from Boston to China during World War II.

He returned to Michigan and started working at General Motors, where he spent 35 years, starting on the line and finishing as a foreman with GMC Trucks. Ed and his wife, Alice, transitioned to retirement as a part of the golfing community around Imlay City. They spent their winters in Florida on the golf course five days a week with their friends and golf partners.

Ed was an avid woodworker, making furniture and lawn ornaments. He was a long-time member of the Imlay City VFW and the Imlay City American Legion and performed honor guard duties until recently. After his cancer diagnosis, he spent his last two years living at Stonegate in Lapeer, where the staff became his second family.

His wife of 51 years, Alice (Zahnow), preceded him in death.

Plans for Ed’s Memorial have been changed and are being planned for later in the summer.

Please be sure to sign the online register at muirbrothersfh.com to share condolences and memories with the Thomas family.