TRI-CITY AREA — One of Lapeer County’s first mass vaccination clinics encountered a last minute change of plans but that didn’t stop local residents from getting protected against COVID-19.

On Tuesday morning, federal health officials recommended that the use of Johnson and Johnson’s COVID-19 vaccine be paused. As a result, the vaccination drive-through clinic set to happen yesterday, April 13, still took place but participants instead received the first of two doses of the Moderna vaccine. Staff on site said they had 1,700 doses available that day. 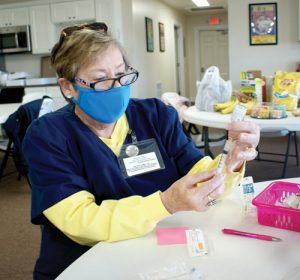 Sharlene Kennedy, a volunteer with the Lapeer County Health Dept., fills syringes with the Moderna vaccine at the Eastern Michigan Fairgrounds on Tuesday morning., April 13.

Lapeer County Health Department Director Kathy Haskins informed the media of the change in plans a few hours before the clinic at the Eastern Michigan State Fairgrounds was due to begin at 10 a.m.

The drive-through event intended to use the one dose Johnson and Johnson shot but both the Centers for Disease Control and U.S. Food and Drug Administration announced they want to temporarily halt its use while they review a handful of reported cases of rare and severe blood clots among the more than six million people who’ve received the vaccine.

Health department officials said the Johnson and Johnson doses earmarked for yesterday’s clinic are currently in storage at Pinnacle Foods in Imlay City for the time being.

Later that day, the county was scheduled to host a special vaccine clinic for 16 and 17-year-olds where the Pfizer vaccine would be administered.

According to the state’s vaccine dashboard, Lapeer County had initiated COVID-19 vaccinations for 22,632 people as of April 8 or 31.3 percent of the population. More than 13,000 residents or 19.1 percent of the county’s population were fully vaccinated as of last week.

St. Clair County’s vaccination numbers are similar. About 32.9 percent of its residents have received at least one shot with 19.4 percent fully vaccinated.

Both counties’ numbers are slightly less than the state average of 39.7 percent or 3.2 million of Michiganders who’ve received at least one shot so far.

The number of new cases and deaths associated with the virus continue to surpass those seen in the fall during COVID-19’s “second wave.”

As of Monday morning, Lapeer County Health Department Director Kathy Haskins said there were 36 confirmed cases hospitalized locally, with nine in intensive care and five on a ventilator.

Currently, Lapeer County is ranked sixth in the state for the number of daily new cases per 100,000 with 107.3 versus the state average of 73.9.

On Monday, Almont Community Schools announced that all high school students would move to virtual learning for at least two weeks starting April 13.

Supt. Dr. Bill Kalmar said that as of Monday, there were 110 high school students on 14-day quarantine.

“These numbers reflect what is happening outside of our schoolhouse doors,” Kalmar wrote in a letter to parents.

“Lapeer County is now in the Top 15 counties in the country (per capita) for COVID-19 cases.”

He urged anyone who traveled during spring break to be tested for the virus.

“We have identified at least seven positive COVID-19 cases in students or staff at the high school who traveled out of state over our spring break,” Kalmar said.

Last week, Governor Gretchen Whitmer recommended that high schools observe a pause in face-to-face instruction and athletic events for a period of two weeks. On Friday, April 9, both Imlay City and Almont districts said they didn’t intend to alter programming but by Monday Kalmar said that Almont had experienced a “rapid expansion of cases” over the weekend.

“I hope you join me in my fervent wish that this is the last time we have to take such drastic action,” Kalmar wrote in his April 12 letter.

Capac Jr./Sr. High School students and staff returned to in-person learning on Monday after two weeks of virtual only instruction.