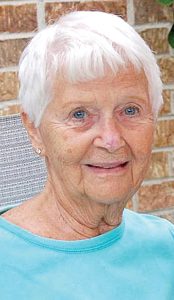 Theresa Loraine Dungey, 92, formerly of Imlay City and Lapeer, entered the Church Triumphant on the morning of April 5. She passed away peacefully in her sleep at the home of her son, Paul, in Kalamazoo, MI.

Theresa was born in Port Huron, MI on January 22, 1929 to Anna and James Sills.
Theresa was a longtime civil employee, both of Lapeer County Health Department and Lapeer County Friend of the Court. She loved baking, cross-stitch, knitting and quilting, ceramic chickens, Broadway musicals and show tunes, summer weeks of trailering near Lake Huron, and in later years, wintering in Homosassa, FL where she was active in the park community and made many friends.

She was preceded in death by her parents; and a brother, James Sills.

Arrangements will be made later in the spring for a memorial gathering.