Wings Event Center, in Kalamazoo, is where the matches were contested. 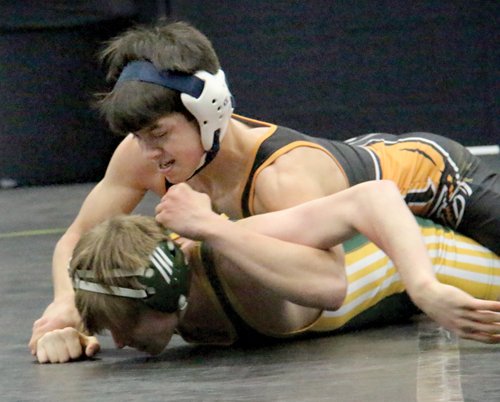 He then watched his tournament standing go to 1-1, dropping a 4-3 verdict to Ty Whalen (24-7), the eventual fourth-place finisher from Whitehall.

Stanton followed that up with a convincing 13-2 victory over Grayling’s Joe Armstrong (29-6).

He then improved his tournament standing to 3-1, that coming with a 9-1 win over Napoleon’s Brenden Yob (24-10). Yob would go on from there to place eighth in the weight class.

Stanton’s next bout was against Grand Rapids Catholic Central foe Lee Braun, who was 26-3 at the time they met. That clash ended with Stanton a 4-3 victor against Braun, the eventual fifth-place finisher.

That landed him a spot in the third-place match where Whalen provided his opposition. This time it was Stanton who emerged triumphant, thanks to a 4-1 outcome.

For his performance, Stanton earned All-State accolades (reserved for the top-eight finishers in the weight class).

Stanton wrapped up the year with a 29-5 mark.

He then bounced back with a 7-2 win against Ogemaw Heights foe Zea Kartes (26-9) and Whitehall counterpart Marco Moore (32-7).

Dwyer squared off versus Algonac’s Jacob Kasner (30-4) next. Their clash drew to a close with Kasner, the eventual fourth-place finisher up 1-0.

He then faced Kingsford’s Toby Wilcox (24-8) for seventh place honors. That bout wrapped up with Wilcox ahead 3-1.

For his effort, Dwyer garnered All-State plaudits (given to the top-eight finishers in each weight division).

Next up was a bout versus Montrose’s Jake Elasavich (22-3). That encounter drew to a close with Elasavich, the eventual third-place finisher, ahead 10-2.