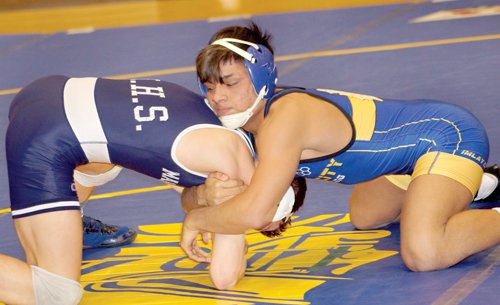 Rojas started things off with a 6-0 win against Adrian’s Joey Spagnoli. Those grapplers entered the clash sporting 25-4 and 21-8 marks, respectively.

Dewitt’s Kiefer Kolito, who was 27-3 when they collided, was his next mat assignment. The clash drew to a close with Kolito, the eventual third-place finisher, ahead 3-0.

Rojas then improved to 2-1 with a pin just 1:18 into his contest with Lake Fenton’s Ty Johnson.

The Imlay City grappler then squared off versus Lowell’s Landon Miller, who was 17-9 when they collided. Rojas picked up a 6-2 victory there. Miller would go to place eighth in the weight class.

Rojas went up against Monroe Jefferson’s Dylan Garcia (21-7) next. That battle ended with Rojas prevailing 4-2 in sudden victory.

That earned him a spot in the third place match where he squared off against Kolito again. This time Kolito triumphed via a pin with 2:22

For his performance, Rojas earned All-State accolades (reserved for the top-eight finishers in the weight class).

Rojas concluded the season at 29-6.