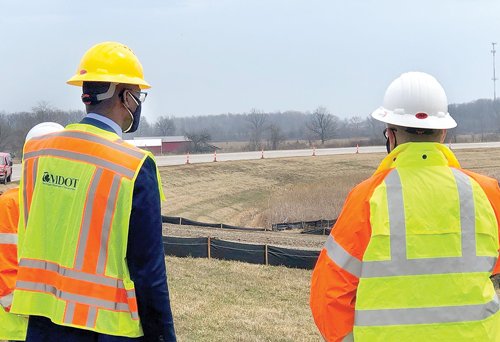 On Monday Lt. Gov. Garlin Gilchrist (left) surveyed preparations being made for the rebuild of I-69 in St. Clair County.

TRI-CITY AREA — Work on two separate interstate projects is due to begin this Monday, April 12.

The Michigan Department of Transportation (MDOT) said that contractors will start repairing two sections of I-69 in the Tri-City area in both Lapeer and St. Clair counties.

In Lapeer County, 8.3 miles of I-69 will be resurfaced between Newark Road in Attica Township and the St. Clair County line in Lapeer County.

“This work will improve the driving surface, extending the life of the roadway.”

Traffic will be maintained throughout the project and motorists can expect to encounter single-lane closures and traffic shifts. At times, intermittent closures of the ramps at M-53 will be required for paving. but state officials say those closures will be announced in advance.

The state believes that the $28 million project should be completed by November 2021 and support 355 jobs.

In St. Clair County, 6.55 miles of the freeway will be reconstructed between the Cox-Doty Drain in Mussey Township to M-19 in Riley Twp.

Jocelyn Hall, MDOT communications representative, said that tree clearing work in the area has been completed and work is currently underway to establish a temporary concrete plant on site. Monday’s official announcement noted that the project will now encompass a small section of M-19 as well, from I-69 north to Burt Rd.

The work is expected to extend over two seasons, concluding in November 2022.

As with the other project, contractors working on the rebuild will utilize single-lane closures and traffic shifts. Ramp closures at Riley Center Road, where the concrete plant is located, will also be required throughout various phases of the project.

According to MDOT, Lt. Gov. Garlin Gilchrist surveyed preparations being made for the rebuild when he made a stop in St. Clair County on Monday.

The project represents a $38 million investment by the state and projects it will support 482 jobs.

Both projects are being funded through the state’s Rebuilding Michigan program, a bonding plan announced by Governor Gretchen Whitmer and approved by the State Transportation Commission more than one year ago that authorized $3 billion for road and bridge repairs.