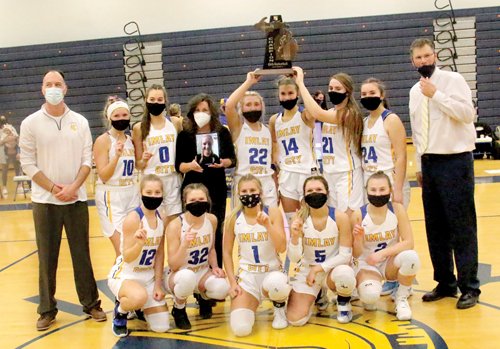 The Imlay City girls’ basketball team poses for a photo after claiming a top regional finish.

With the outcome, Imlay City advances to a quarterfinal clash set for Monday, April 5 at Ortonville-Brandon High School. That battle lists a 7 p.m. starting time. Detroit Country Day provides their opposition for that encounter.

“It was great to have the opportunity to play for a regional title again,” Imlay City Coach Heather Lauwers said. “These girls were hungry to be a part of the game after having our season ended due to the circumstances of the pandemic in 2020,” she noted.

“It was very difficult not being there physically due to a job obligation, but I knew our coaching staff had prepared the girls to the best of their ability. We will need to maintain the focus and momentum that we bring to every game to continue our season.”

In Wednesday’s matchup, Imlay City spotted Lutheran North a 17-9 advantage after one quarter was over with.

Imlay City then bounced back with a 17-7 second quarter edge, good for a 26-24 lead at the halftime break.

The third quarter saw Imlay City net five points as did Lutheran North. That left Imlay City up by a narrow 31-29 count with 24 minutes gone.

The fourth quarter would see things stay close. It was there Lutheran North put together a 4-2 run over a 6:05 span, making it a 33-33 contest with 1:55 remaining.

Imlay City then went ahead 36-33 on an Ana Lengemann triple 1:35 from the finish.

The hosts followed it up with a 7-2 run over the next minute-plus. assuring themselves of a 42-35 victory at night’s end.