Van Andel Arena, in Grand Rapids, is where the matches were contested.
Frangedakis (19-4) opened his stint at states with a win by pin against Hesperia’s Stephen Priese (20-11). It came with 1:49 gone. 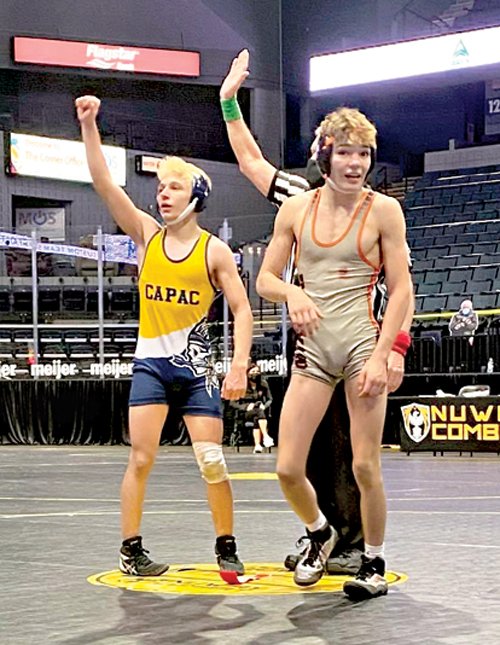 He then improved to 2-0, thanks to a 10-2 victory over Lawton’s Caleb Mallory (17-4), the eventual seventh-place finisher.

Frangedakis followed that up with a 14-10 triumph against Rudyard’s Bradley Hall (22-1). His opponent would go on from there to register a third.

Those outcomes landed Frangedakis a spot in the title match where Clinton’s Connor Younts provided the opposition. That battle drew to a close with Younts ahead 5-0.

For his effort, Frangedakis earned All-State plaudits (given to the top-eight finishers in the weight class).

Frangedakis completed the season at 22-5.

He then was pinned with 3:36 elapsed by Delton Kellogg counterpart Caden Ferris, who was 34-2 when they met. Ferris would go on from there to win the weight class.

Tank then bounced back with a victory by pin against Whittemore Prescott’s Jesse Morrison (15-10).
It took him 3:19 to accomplish the feat.

That was followed by an 8-5 loss to Leslie’s Benjamin Smieska (34-8), the eventual sixth-place
finisher.

Tank then faced Union City’s Gary Iobe (27-10) for seventh place honors. It was there he prevailed via the
pinfall route with 39 seconds gone.

For his performance, Tank claimed All-State accolades (reserved for the top-eight finishers in each weight class).