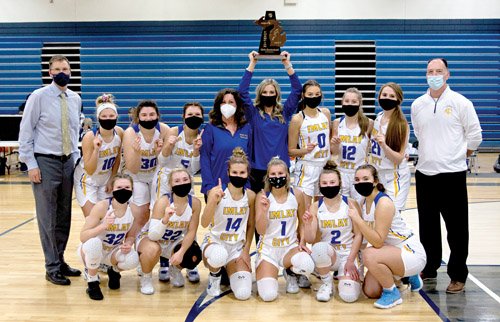 The Imlay City girls’ basketball team poses for a photo after clinching a top Division 2 district finish with a win over Almont last Friday in Yale. Photo by Rod Soule

IMLAY CITY — The Imlay City girls’ basketball team made it back to back years as Division 2 district champions, accomplishing the feat with a 56-33 triumph against Almont in the title tilt last Friday night.

Yale High School is where the game was contested.

With the outcome, Imlay City advances to a regional it hosts.Almont finishes their season as owners of an 9-9 mark.

In Friday’s clash, Imlay City charged out to a 15-7 advantage after one quarter was complete.

When the action resumed, Imlay City continue to pull away. Aided by a 12-6 third quarter advantage, the Spartans increased their cushion to 46-25 with 24 minutes gone.

Imlay City then outscored Almont 10-8 the rest of the way, putting the finishing touches on a 56-33 win.