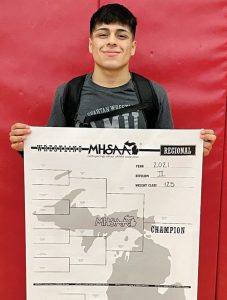 IMLAY CITY — The Imlay City wrestling team advanced one competitor to this Friday’s Division 2 individual state finals which will be hosted by Van Andel Arena in Grand Rapids.

He qualified on the strength of a top-four weight class showing at a regional last Saturday in Fremont.

Rojas earned the distinction of weight class champion at 125 pounds. He concluded his title run with a 7-2 victory over Alpena’s Austin Bush.