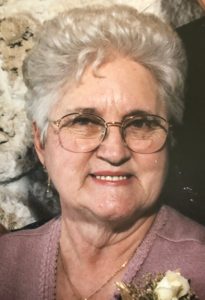 Lourene Frances (Schalau) Brown, 88, passed away peacefully on March 25, 2021 at San Gabriel Memory care in Glen Carbon, IL. Lourene was a lifelong resident of Imlay City and a proud graduate of Imlay City High School class of 1950. She maintained lifetime friendships with several of her classmates and had a deep love for her family’s roots in the community.

Shortly after she graduated, Lourene encountered a tall, handsome boy hanging upside down from the neighbor’s tree, playing Tarzan. He was taken with her beautiful green eyes and shy smile and never made it to Flint to enlist in the Air Force as he had planned. She liked to say that she was not immediately impressed with him but within a few months they were married, because, as Lourene would explain with a wink, “What else is there to do in Michigan in January?” Their union would last for 69 years until his death in September.

After their wedding, Lourene’s new husband, Farris, took his city bride to a series of increasingly rural homes before he brought her to an uninspiring farm down a dirt road north of Lum. Together they turned those 60 acres into a homestead complete with a house they built themselves in the evenings and on the weekends, a pond for swimming and skating, bountiful gardens, and even the indoor plumbing they had lacked when she began raising the first of her four children.

Lourene was a very traditional wife and mom, following the “Monday washday, Tuesday ironing, Wednesday baking, Thursday shopping, Friday cleaning,” schedule for most of her life. She enjoyed traveling, playing cards, snowmobiling, knitting, baking, and she volunteered with the Lum Hospital Auxiliary.

Lourene also loved to shop and honed her skills anytime the opportunity arose. She could not pass up a bargain–especially if that bargain happened to be pink or sparkled–and taught her children as toddlers to spot the word “Sale” and the color red, so they could help her find the mark-down racks faster. Having spent her life in Imlay City, Lourene knew most everyone in town, which turned routine shopping trips into day long social events as she made her way around the downtown stores or through the aisles at Rankin’s IGA. People said she was easy to talk to and total strangers would spontaneously pour out their life story to her. And she loved every minute of it.

Lourene’s love of animals continued until her final days. Over the years, she delighted in spring litters of barn kittens, the chipmunks that visited her bird feeders, and the deer that made beds in the shrubs under her window. But most of all, Lourene loved dogs and they loved her right back. Nothing made her as happy as cuddling one of her dogs-or any dog, for that matter. She often asked after people’s pets before inquiring of the people themselves and her grand dogs were truly her second family and brought her joy until the end.

She was preceded in death by her husband, Farris Brown; and son, Dale Brown.

Memorials may be made to Hawkeye and Friends dog rescue in Imlay City.

Due to recent health concerns of the COVID-19 pandemic, social distancing (six feet apart), masks (to be worn at all times), and limited occupation will be enforced.

The family will be available for visitation 9-10 a.m., Wednesday, March 31 at Sacred Heart Catholic Church.

Please be sure to sign the online register at muirbrothersfh.com to share condolences and memories with the Brown family.