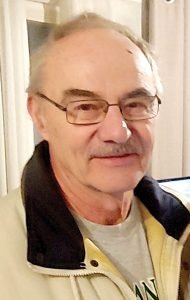 He was born July 17, 1948, in Cass City the son of the late Rothwell and Elizabeth (Meek) McVety.

In his youth, his family farmed for many years in Brown City.

Lloyd was employed by Twist Drill, Rochester as a machinist for 14 years. During that time he also owned the Sunoco station in Metamora. Lloyd moved to Colorado in late 1983, to work the oil fields for Union Oil. Lloyd and Pat married April 26, 1986. They would go on to work in real estate together until they returned to Michigan in 1993 to be closer to family. Lloyd managed the Capac Napa Store for 10 years before moving into retirement. Lloyd and Pat worked part time at Approval Power Sports in Sandusky delivering motorcycles for eight years. Lloyd enjoyed spending time with family and golfing. He and Pat were also members Good News Assembly of God Church, Marlette. Lloyd was no stranger to sharing the gospel.

He was preceded in death by his son, Craig Russell (2001); granddaughter, Amanda Russell; and sister-in-law, Elaine McVety.

The family honors the memory of Lloyd and invites you to visit and share memories Friday from 2-8 p.m. at Good News Assembly of God Church, Marlette. Funeral services will be at 11 a.m. Saturday at the church, with 10 a.m. visiting. Pastor Douglas L. Richardson will officiate. Burial will be in West Berlin Cemetery, Berlin Twp.

Memorials are suggested to ‘Wishes of the Family.”