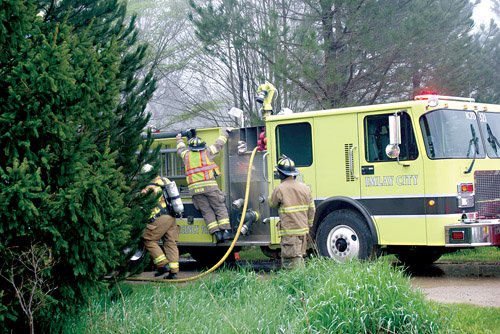 Imlay City firefighters at the scene of a May 2020 barn fire in Imlay Township. The department is looking to recruit new members to grow their force to 20.

IMLAY CITY — Responding to a fire alarm at any time of day and in all types of weather is not something that appeals to everyone.

Which explains why the Imlay City Fire Department is currently in serious need of new firefighter recruits.

Fire Chief Rick Horton is putting out the call for local men and women who are willing to make such a commitment to themselves and their community.

Horton admits that not everyone is cut out to be a firefighter, but as the old adage applies, he says “someone’s gotta do it.”

Currently that responsibility is left to just 16 dedicated individuals, who typically respond to an average of 10 fire calls per month in the city and Imlay Township.

“We’re definitely shorthanded,” Horton said. “We need to get up to at least 20 people who are willing and able to make the commitment.”

Horton said it’s the “commitment” that separates those who talk about being a firefighter and those who actually do it.

“We’re looking for able bodies who are willing to get trained and to serve their neighbors and the community,” Horton said.

In exchange for that commitment, new recruits will be provided free training along with required protective gear and equipment.

“It’s not just Imlay City that is hurting for firefighters,” Horton said. “All of our local fire departments need people.

“I can remember a time when there was a waiting list to join the fire department,” Horton recalled, “but that’s not that way anymore.”

He said Imlay City Fire Department members meet the second and fourth Mondays of each month at the new fire hall on E. Borland Rd.

For further information about the Imlay City Fire Service or to leave a message at the fire hall call 810-724-6262.