IMLAY CITY — City officials have decided to temporarily postpone discussion of a plan to disband the Imlay City Police Department and place it under the authority of the Lapeer County Sheriff’s Department.

On Tuesday, March 30, Mayor Joi Kempf announced that such public discussion will now take place at a later date.

“I will not be placing the police discussion on the April 6 agenda, in service to our residents,” Kempf said. “We will postpone this discussion so that every resident will have the opportunity to join in on this very important police discussion.” 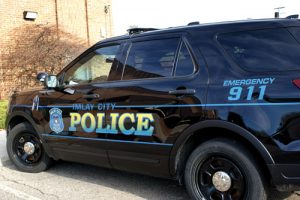 Imlay City Police patrol cars could soon become a thing of the past if city commissioners decide to disband the city’s police department and place it under the control of the Sheriff’s Department.

Meanwhile, Kempf is making herself available tomorrow, April 1, to residents interested in discussing the matter through one-on-one discussions at city hall.

Both Horton and Kempf pointed out that the city has not yet been provided a formal proposal from the Sheriff’s Department.

Horton said the matter had recently been discussed with Lapeer County Sheriff Scott McKenna, who was in town to assist with the city’s search to find a new police chief.

The department’s current leader, Scott Pike, recently announced his plans to retire with April 30 being his last day on the job.

McKenna said on Monday that it was during that meeting that the subject of comparing police coverage and costs was broached.

The annual cost for police protection in Imlay City is currently
$1.3 million, a figure McKenna believes is higher than what an agreement with the county’s law enforce­ment agency would cost.

“We would need to look at all the logistics and details before coming up with a specific proposal,” McKenna said, “but I do believe we can provide better coverage, and at less cost.”

Horton stressed that no official action will take place until city commissioners have the opportunity to review an official proposal from the Sheriff’s Department.

“We didn’t go into this search process looking for this to happen,” Horton said. “But if the Sheriff’s Department can give Imlay City better police coverage for less money, then we need to look at that.

“I don’t think we would be responsible to our residents if we did not give consideration to this option.”

Mayor Kempf said she believes that any potential changes related to the police department will be in the best interest of city residents.

“Our effort is to provide our citizens with the absolute best services available, as well as to be fiscally responsible to our community,” she said.

Should such a plan move forward and be approved, Imlay City police officers might still have the option of serving in Imlay City, though under the auspices of the Lapeer County Sheriff’s Department.

Kempf pointed out that “if requested by the city,” some officers could still be assigned and stationed in Imlay City.”

It was on Thursday, March 25, that Horton, Kempf and Pike hosted a meeting at the Imlay City Hall, during which current police officers were advised that the city manager was exploring the possibility of contracting with the Sheriff’s Department.

“We did not want to catch them off guard,”
Kempf said. “It was our intent that they be the first to know that the city manager would be looking into this option.”

Kempf said the next
step in the process is to collect and compile all of the information from the Sheriff’s office, before engaging in open dialogue with the community.

“We want to determine what course of
action is best for the city as a whole,” she said.

Veteran Imlay City Police Officer Joe DeLuca offered his own opinion about what is best for the city.

“I think this is a poor decision made by a commission that was elected to continue to advance our community and not jeopardize it,” DeLuca said. “The fallout from this unsound idea is yet to be determined.
“What’s most disheartening is that my fellow police officers and I are being treated as just a number on a spreadsheet.”

Tomorrow, Thursday, April 1, Kempf invites concerned citizens to meet with her in “one­-on-one” discussions at the Imlay City Hall.

During those sessions, residents will have the opportunity to express their opinions and concerns about the police department issue directly to the mayor.

“Take a minute to stop in and ask questions and voice your concerns and support,” Kempf said.

“All Imlay City residents are welcome.”