Growing season gets an early start 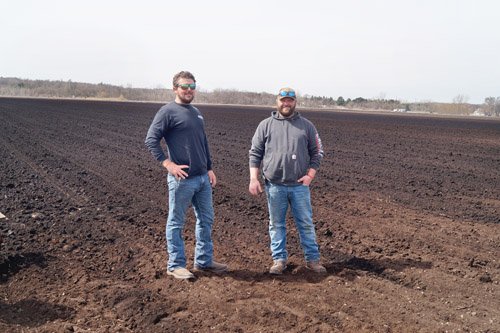 Brothers Craig and Chris Brandt are in the midst of their earliest onion planting season in the muck fields outside of Imlay City.

IMLAY TWP. — Just four days after spring officially ‘sprung,’ a crew from Valley Farms was in the muck fields, starting to plant their 2021 onion crop. Craig Brandt, who operates the vegetable farm with his brother, Chris, said March 24 was the earliest date in recent history that they’ve been able to put seed in the ground.

“We typically try to get in the fields sometime around April 9 and last year it didn’t happen until April 26. Usually, at this time of year, the fields still have standing water in them,” Craig said on Thursday afternoon looking out over the activity from Pennell Road near Bowers.

The farm’s field crews started planting on Wednesday, March 24 and got their first 60 acres–a mix of red and yellow varieties–in by the end of day Thursday before rain moved in overnight. On Thursday, longtime employee Joe Pantoja was behind the wheel of the tractor pulling the planter.

Craig said the soil and weather conditions were just right. The soil had drained sufficiently to be workable but there was still some moisture to give the seed a good start and they’d get an extra boost with Friday’s rain.

Despite all those favorable factors, Craig admitted planting early has its risks. For onions, it’s the loop stage—about 15 days after planting—when they’re most vulnerable. By the time they get to the flag stage—about 20 days after planting—the crop is heartier. Craig said they opt to use a barley cover crop to protect the onions from the wind and cold early in the season. Once the barley gets four to eight inches tall, it gets terminated.

“Onions can tolerate more cold than carrots,” Craig said. They typically start getting carrot seed in the ground in mid-April and then it’s time for sweet corn–the Brandts’ third crop –come early May.

Earlier this month, the National Weather Service predicted that much of the nation, including Michigan, would experience warmer-than-normal temperatures and above normal precipitation April through June.

In a few months’ time, when the onion crop gets harvested, it will make it’s way to home cooks and restaurant chefs. The Brandts’ onions are sold under both the Valley Farms and private labels.

Like the weather so far in 2021, Craig is hopeful the market for onions is favorable once again. Although the pandemic negatively impacted restaurant sales in 2020, the consumer market was very strong.

“More people were cooking at home last year and we saw increased demand overall,” he said.

According to Kansas State University, 70% of U.S. households were the central food preparation spot for 80% of meals as of fall 2020. In 2019, the same survey found that to be the case in 30% of American homes.

A combination of more restaurants opening plus home cooks still enthusiastic to churn out meals indicates sales could be robust again, Craig said.