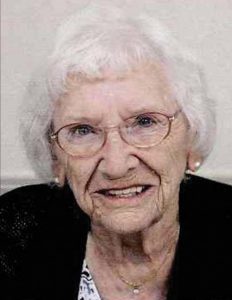 Bess Grucz, 94, of Imlay City, died Thursday, March 25, 2021 at her home surrounded by her loving family. Bess Marie Bockmiller was born July 15, 1926 in Van Dyke (now the southern part of Warren), MI. She was the daughter of the late Nicholas and the late Anna (Weigang) Bockmiller. Bess grew up the Centerline, MI area. She attended Lincoln and Bush High Schools. Bess married Roman Grucz, II on January 12, 1946 in Detroit, MI. Her husband, Roman, preceded her in death. She moved to Imlay City, MI in 1989.

She was a homemaker, raising her family. Bess was a very faithful member of Family Baptist Church of Imlay City. She enjoyed the fellowship of other members and especially Pastor Sue Brown. Bess was a member of the Joyful Heart Ladies Club in Imlay City that meets at the Imlay City VFW Hall. She liked to bowl and golf.

She was preceded in death by her husband, Roman Grucz, II; and her brothers, Nicholas Bockmiller and William Bockmiller.

Cremation has taken place. The family is planning a memorial to be held later at Family Baptist Church of Imlay City and interment of cremated remains, next to her husband Roman, at Great Lakes National Cemetery in Holly, MI.

Arrangements were entrusted to Muir Brothers Funeral Home of Imlay City, 225 N. Main Street, Imlay City, MI. Please be sure to sign the online register at muirbrothersfh.com to share condolences and memories with the Grucz family.