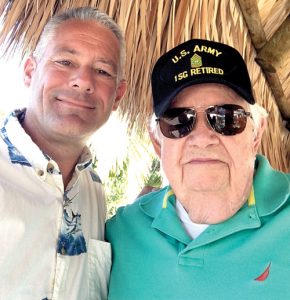 Robert J. Needham, 87, of Imlay City, died Monday, March 8, 2021 at McLaren Flint Region Medical Center of Flint, MI. Robert James Needham was born July 20, 1933 in Cicero, IL. He was the son of the late Ernest and the late Avis (Gaetzke) Needham. Robert grew up in Detroit, MI. He attended Detroit Public Schools. Robert married Joyce Joanne Bonnell on December 20, 1954 in Detroit, MI and they were married for over 55 years. Robert and Joyce moved to Imlay City in 1994.

He proudly served in the United States Army during the Vietnam War. Robert served three tours in Vietnam during his 22 year career. He retired as a Master Sergeant from the United States Army in 1972. After retiring from the service, he worked for several small factories in the area, 2nd tier suppliers, and was a proud member of the UAW. Robert was a member of the Imlay City V.F.W. and American Legion.

Robert enjoyed working in his yard, landscaping and planting flowers. He was a snowbird during the winter, going down to visit his Ocean Cove friends in Key Largo, FL.

He is survived by his son, Robert Needham and Wendy of South Portland, ME; and his granddaughter, Julia Anne Needham attending college at Roanoke, VA.

Robert was preceded in death by his wife, Joyce Needham; his sister, Betty Cooley-Ballew; and his brother-in-law, Leonard Cooley.

Cremation has taken place. The family is planning a memorial for the summertime.

Please be sure to sign the online register at muirbrothersfh.com to share condolences and memories with the Needham family.