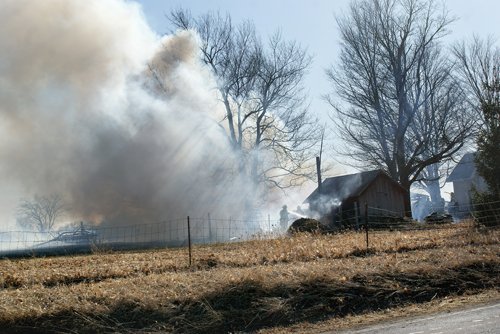 Thick smoke emanates from the site of a garage fire on Bowers Rd., west of Blacks Corners Rd. Fortunately, firefighters were able to stop the fire from spreading to the nearby home.

Due to prevailing westerly winds of 30-45 mph, the fire spread quickly through the dry grass to a heavily wooded area directly east of the property.

There, firefighters using water brought to the scene from nearby ponds, sprayed the tops of the trees to control the fire’s spread.

Imlay City Fire Chief Rick Horton said firefighters were able to save the nearby house about 20 feet away from the two-car garage.

“The fire was already fully involved when we got there,” said Horton. “We were fortunate it did not spread to the house.”

Aided by the strong winds, Horton said the fire spread through the dry grass, igniting brush and dead trees.

“We were focused on saving the house,” Horton said, “but those winds became a challenge when the fire got into the dead trees in the woods,”

Horton said firefighters had to return to the scene later in the day to extinguish hot spots.

“After dark, it started up again at a few points and firefighters had to go back out there.”

Horton acknowledged the efforts of the neighboring fire departments, as
well as Lapeer County EMS personnel who stood by, and Lapeer County Sheriff’s deputies who provided traffic control.

A relative of the Bowers Rd. homeowner said the house was constructed in 1932, which was likely the same year the garage was built.