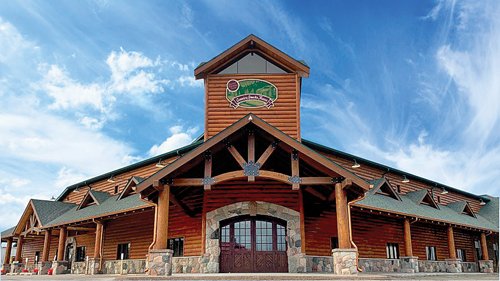 Returning Country Smoke House customers will be impressed with the renovated building’s expansiveness and many amenities, including the new hand-split stone fireplace at the entrance.

Customers flocking back to shop and view renovations

ALMONT TWP. — Following a year-and-a-half hiatus, the Country Smoke House is back in business at 3294 Van Dyke (M-53).

The award-winning meat processing facility and retail store had been closed since Oct. 4, 2019, when fire caused extensive damage to portions of the building.

For Smoke House owners Steve and Sue Francis, the rebuilding process was rife with a series of delays and challenges, due in large part to the onset and continued impact of the coronavirus.

Steve alluded to having to deal with a litany of pandemic-induced problems, such as difficulty finding available contractors and work crews; slow and irregular deliveries of materials for the rebuild; slow reimbursements from the insurance company; and various other delays and setbacks.

Good to be back

On Monday (March 15), Steve and Sue were all smiles as they welcomed back old customers and greeted new ones to the retail store.

Steve said the business was inundated with customers over the past weekend on the heels of what he described as a “soft opening” on Wednesday, March 10.

“We had to stop the bleeding,” Steve Francis said of his and the family’s need to reopen.

Francis said returning customers have been taking notice of the many new amenities in the retail store, including the hand-split stone fire place that greets them upon entrance to the building.

The fireplace was completed by Imlay City stone mason Wes Phillips who took over the task when his father, Fred Phillips, passed away last summer.

Francis said most of the stones used for the fireplace were acquired from the local countryside—including many from his own property.

The reopening was welcome news for the Smoke House’s loyal customers, including Linda Dubey of Attica, who was among the first to arrive on Monday.
“I’m just glad to see this business up and running again,” said Dubey. “I’ve been waiting a very long time to get some more of the smoked pork chops.”

Also anxious to get to the Smoke House’s meat counter was Denise Pauli of Capac, who had been a regular customer before the fire.

“We’re thrilled to see that they have opened again,” Pauli said. “I couldn’t wait to come back and order some of their maple bacon.”

Smoke House employees were just as eager to see the business reopen after the long layoff.

Sheryl Miller, a longtime Smoke House employee, said she is happy to be back.

“Fourteen years ago, I stopped in to help out one day and I’ve been here ever since,” Miller said. “This place is like a second home for me.

“Steve and Sue are wonderful to work for,” she continued. “They make us feel like we’re all part of a family. This reopening feels like being able to come back home again.”

From Steve’s perspective, the chance to see so many of his old customers walk through the doors is satisfying in itself.

“It’s been tough on the family financially and emotionally,” he said. “It’s great to see our customers again.

“We had one customer come in here and spend $700 on items for herself and friends. It’s been like Christmas in here and we appreciate the support.”

Steve said he expects the Country Smoke House’s outdoor barbeque to open up by early to mid-May.